We come to the anniversary of 9/11 and I remember where I was that day, as most Americans do.

But, never able to let a good memorial service rest, we see that the Black Lives Matter folks are making threats against the police.  That's not a good idea.


An Internet radio show purportedly tied to “black supremacy” and “black liberation” groups recorded a segment that included threats of violence toward police officers, the Daily Caller reported. One caller on the show said, “When those [expletive] are by themselves, that’s when we should start [expletive] them up.” That caller later said, “’Cause we already roll up in gangs anyway. There should be six or seven black [expletive], [who] see that white person, and then lynch their ass. Let’s turn the tables.”

Actually, if we look at felonious police killings over time, 2015 is on schedule.   While each police death is a tragedy, felt keenly by the family and the agency, we're pretty well on track.  The whole "War On Cops" narrative seems to be over-blown.  It's a pretty silly war when the casualties as so low.

Over at Reason.com, they've got a pretty good article, looking at the data, and data is what drives reasonable people. If we look at felonious gun-related deaths of police officers over time, we see that for this year, we're above 2013, but below 2014.  However, if you look at the spike back in the '70s we've made quite a bit of progress 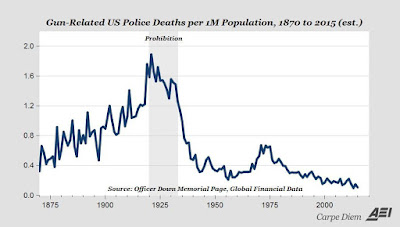 Of course, you can click on the chart for a better look, but gun-related police deaths have been declining since then, and is lower than it's been since 1870.  But, the chart above is adjusted for population, so let's look at another, not related to population, but with actual numbers of police officers killed by guns.  We see much the same trend. 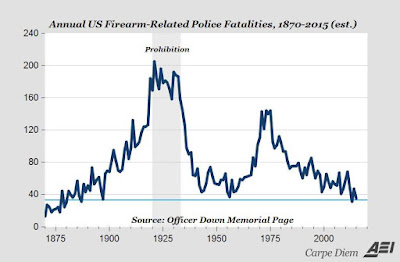 Again, after that spike in the late '70s we've seen the number of cops shot each year decline.

The simple fact is that most shootings against the police are unrelated.  They are individual events that are fueled by the individual incident.  Usually caused by fear, paranoia, mental instability, or drugs, each police killing, while regrettable, is an individual event, totally devastating to the family and the agency involved.  But, there really doesn't seem to be a "War on Cops".

Y'all be careful out there.
Posted by Pawpaw at 3:30 PM

Threats are liable to come back and bite them... And I hope to hell they do. ONE dead officer is one too many. Stay safe out there!