A reader pointed me to a fascinating article by John Taffin in American Handgunner magazine that talks about the history of the fast draw game.  The game has been through changes and evolutions that formed the basis of several organizations today, including World Fast Draw, CFDA, CAS, and SASS.  Some of the earliest folks in Fast Draw are fairly common names to us today.

If you look at the picture above, you'll note that this group, known as the first Combat Masters, are all using semiauto pistols, except for Jack Weaver.  Weaver, of course, is the originator of the Weaver Stance, taught for decades at police academies all over the world.  Next to him is Jeff Cooper, who needs no introduction to my readers. 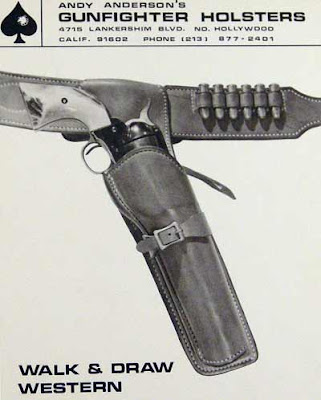 And ad from Andy Anderson's shop in California.  Legend holds that Marty Robbins saw a revolver in Anderson's shop that captured his imagination and was the basis for the song Big Iron.  That holster and belt rig would be completely at home on the line at a CFDA competition today.

It's altogether a fascinating article.  Click over on the link above and go read the whole thing.
Posted by Pawpaw at 8:57 AM

It is, and that picture is something else too!