It's September, and the height of the hurricane season, so we keep watching the National Hurricane Center, where Tropical Storm Grace has appeared in mid-Atlantic. 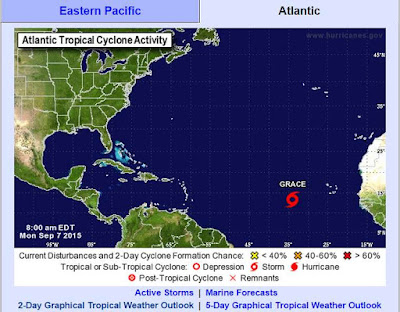 She's not a big storm, as tropical storms go, and from the discussion, it doesn't appear that she'll make hurricane status:


Given the strong southwesterly upper-level winds expected near the eastern Caribbean late in the period, it is quite possible that Grace will degenerate to a tropical wave before it reaches the Lesser Antilles.

We can hope that the models are correct and Grace becomes a simple line of thunderstorms.

As for PawPaw on this Labor Day, I have a simple little carpentry project to take care of, then I'll enjoy the rest of the day with Milady.

Ha, all of those that you watched and everybody was calling the next hurricane of the century.....they all petered out. Now watch this piddly little one blow up to be something....karma; aint it a bitch!?!?!?