In 1950, Smith and Wesson introduced what was destined to become an iconic revolver, the Chief's Special.  A five-shot, small frame revolver in .38 special, it was introduced at the International Association of Chiefs of Police conference in Colorado.  Derived from the old Hand-Ejector, the frame was beefed up to handle the new .38 Special cartridge and the new frame was called the J-frame.

It was marketing genius to introduce it at the IACP conference, but the simple fact is that the J-frame revolver makes a lot of sense for a lot of people  The .38 Special is a wonderful old cartridge, a cast-bullet dream, but the newer loadings from the ammo manufacturers today make the .38 Special into a perfectly capable defense package.  Combine the light weight and small frame of the Chief's Special with the good ammo we find today and the little revolver is perfectly suited to defensive carry.

I've owned and carried several J-frames over the years.  I like the little guns, and indeed, I carry a J-frame today, in the form of an Airweight Model 38, another revolver built on the J-frame.  But, like most revolver fans, I like the Model 36.  The Model 36, is of course, the basic Chief's Special, renamed when Smith and Wesson went to model numbers rather than names.

Yesterday, I walked into my favorite pawn shop.  A family friend had asked me to look for a small handgun.  I had an hour to kill between assignments and decided to see what Jimmy had in his gun case.  He had the usual semi-autos and a few revolvers, but all by itself, over in the corner, lay a gun that caught my eye. 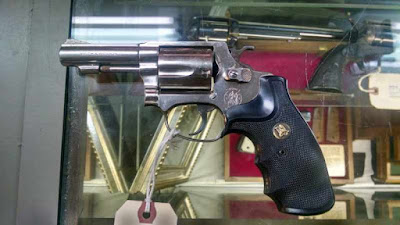 It' s a nickeled Model 36, but it has the heavy, 3" barrel.  And Pachmayr grips.  I asked to look at it, and the counterman handed it across the counter.  It felt good in my hand, and those big grips may cover either the square butt or the round butt.  Smith made the little gun with both grip styles.  The little gun seemed tight, as most of them do.  J-frames are guns that are generally carried much and shot little, and even the survivors from 50 years ago are normally pretty tight.

I looked at the price tag, and it seemed about right for a used revolver, but pawn shops are places where the price is flexible, and I've been buying in this shop for more than a decade, so the counterguy and I began the dance.   Then along comes the shop owner, the world famous Cajun Pawn Star, and we started talking about other things. We walked toward the back door, and I shook Jimmy's hand and crossed the street to my parked truck.

I climbed up in the truck, started the engine, and realized that the counterguy and I had not finished our dance regarding the price.  I texted my son and asked him what he thought, then got the checkbook out of the console and walked back in the shop.  In a few minutes, the counterguy and I had come to a conclusion, so I wrote him a check to hold the gun on layaway.  I'll get it out in a month or so.
Posted by Pawpaw at 3:30 PM

It would probably make me jealous if I knew how little you paid for that jewel. My air weight has taken a beating, but it's still worth its weight in aluminum.

That's an unusual one with the three inch barrel...