Skeet was my first love in the shooting sports.  Way back in 1965 I was hired as a skeet boy at the McBride Rod and Gun Club, England AFB, LA, for the princely sum of 50 cents per hour.  I was 12 years old.  The club had intramural shoots on Saturday and it was the duty of the skeet boys to lug cases of clays to the trap houses and keep the machines running.  At the end of the day we got to shoot a little, before the range master closed the range.  Great stuff for a 12 year old kid.

With the advent of sporting clays, five-stand, and the other sports, skeet kind of fell by the wayside. but I've always had a love for the semicircular range with eight positions. 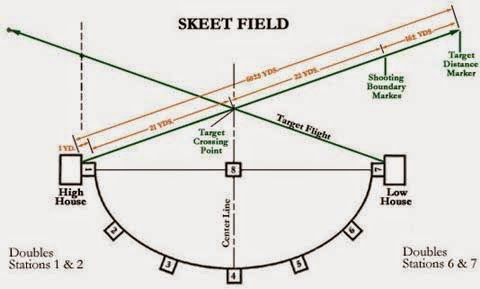 I thought that skeet in this area was dead, a long-ago sport that I'd never see again.  Until I opened our local rag yesterday and found that there is a club nearby.  Not much information, but the Bayou Boeuf Skeet Club is located at 120 Meeker Road, Lecompte, LA.  318-776-9301.  Very little information about them on the NSSF page above, but now I've got their address and phone number.  I'll have to call them and see what they're all about.
Posted by Pawpaw at 10:03 AM

Gah... I truly suck at skeet and trap... Embarrassment to the max...