If you live in Louisiana, this time of year you start watching the weather maps.  Hurricane intensity increases in September, taking advantage of the warm water in the Gulf of Mexico that's been warming all summer.  So, one of my daily reads this time of year is the National Hurricane Center, where we find this lovely graphic this morning. 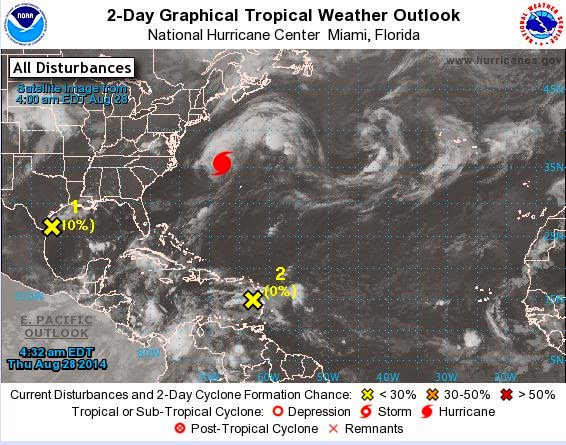 Three items of interest this morning.  Hurricane Cristobal appears to tracking the east coast where it will eventually get over cold water and lose its rotation.  The Rio Grande Valley looks to be targeted for a drenching, and there's another disturbance near the Antilles that bears watching.  We'll be keeping a weather-eye on that one for sure.  Those of us in hurricane country remember Katrina, which started in late August and came ashore on August 29th, and we remember Rita, two weeks later, which was stronger than Katrina but came ashore in an area where people understood hurricanes and didn't cry about getting run over by one.

Sure, hurricane season starts in June, but I don't really get concerned  until the last week of August.  Then I keep an eye peeled until the first week of October.
Posted by Pawpaw at 5:32 AM

Yep, smart move... And time to stock up on consumables...