I've been watching the legal news today.  Evidently, the New Mexico Supreme Court decided a case today.  The basic facts of the case was that a gay couple wanted to perform a commitment ceremony and they tried to get a photographer to take photos of the ceremony and the accompanying reception.  The photographer declined, saying that she objected to gay marriage.  The gay couple sued, claiming discrimination, and won, all the way to the New Mexico Supreme Court.  Volokh is all over this case like a bad rash, and some of the comments are hilarious.  What I particularly find amusing is the distinction drawn between the idea of wedding photography as art, and the baking of the commitment cake (wedding cake, anyone).  Particularly  this quote in Dale Carpenter's analysis.


It also rejected the idea that especially creative and expressive professionals (like photographers) should be exempted under the First Amendment while more mundane and generic services (like cake-baking) should not be.

What I find really amusing is the idea that a photog might be more creative than a baker, as referenced in the block quote above.  Evidently, baking a wedding (commitment?) cake isn't considered art.  But, I'd be damned careful asking someone to cook something I intend to eat and serve to guests, if they didn't fully support my ceremony.  Or, I wouldn't tell them the whole story. 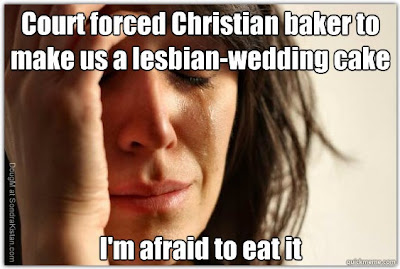 That would be a huge problem.

For the record, I'm evolving on gay marriage.  I have a niece who is gay and when it's time for her to chose her life partner, I intend to support and celebrate their union.  Forcing someone to work your wedding who doesn't support you is just a wee bit silly, and in Willock's case, suing the photog is simply being petulant.  Get over yourself and find a photographer who wants the job.
Posted by Pawpaw at 9:55 PM

Email ThisBlogThis!Share to TwitterShare to FacebookShare to Pinterest
Labels: culture

Dangerous Food Preparation: My first employer said to a customer one day (This was 45 or more years ago.) "Remember how they put saltpetre in our food? It's working now!"

We have such a principled baker right here in my town of Gresham, OR. The outfit is called Sweet Cakes, & they're doing quite well since they took their stand.

So you want to force somebody to work for you!??!!? Sounds like slavery to me.