A cushaw is a kind of squash grown in Louisiana.  It's not a spahetti squash, more of a dessert squash, with a meat like pumpkin.  Milady texted me today, asking about cajun squash, and I told her about Mirlitons, but that wasn't what she was looking for.  I finally had to email Mostly Cajun and he put me on the right track.  It's a Cushaw. 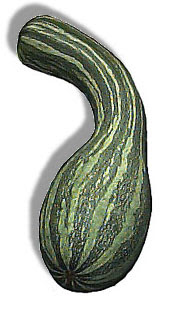 If you can find a Cushaw, here's a good recipe for a dessert, if you like desserts made with squash.  The Cushaw has a meat like a pumpkin, and if you don't have the room to grow pumpkins, the cushaw will climb trees at the edge of your garden.

Mostly Cajun also reminded me of a squash called a cocozelle, which is a type of zucchini.  I planted three hills of cocozelle one spring, in southern Natchitoches Parish, and I'll never be so weak as to plant those again.  I planted three hills, and that squash took two acres of my pasture.  They were climbing pecan trees wit the squash hanging down like ... well, like squash.  The cattle loved them, and we had plenty to give to friends.  There is only so much zucchini that you can give to friends.  The boys and I eventually discarded the surplus by making them into tiny canoes and floating them down the ditches during big rains.  Some of them took root on the banks of Bayou Derbonne and we nearly had an ecological disaster almost like kudzu.

Thanks Cajun, for reminding me about that.
Posted by Pawpaw at 6:31 PM

I've lived in Missouri my whole life, and I've always been told it's impossible to grow just enough zucchini. Plant 2 hills and they die, plant 3 hills and you get enough to feed 3 counties.

Can you make fuel out of them?

Courgettes (Zucchini) are the devil's vegetable. I once spent a summer working in the tunnel house of a market garden raising courgettes. I got free room and board, but there was courgette in every single meal, including breakfast. If I never eat another one again it'll be too soon.

Denis (from the GC)