I'm still learning this new phone, and I'll probably be learning it for a while.  There's lots of bells and whistles on this thing, and honestly, these things have become more personal assistant than telephone.  Really, talking on it is a fairly minor part of the whole experience.  It's a telephone, for sure, but they've crammed a lot of other technology in that little box.  I doubt that I'll ever use half the capability of the device, but what I'm seeing is impressive.  And, this isn't even this year's technology.  This is last year's tech.   It's a phone, a camera, a GPS, a compass, an email device, a video-watcher, an internet browser, the list just goes on and on.

Dad was a telephone man, worked all his life for the local Ma Bell affiliate, and back in the '70s he told me that one day we'd all carry a phone in our pocket.  I thought that the old man was bonkers, but his predictions have paid out.  He got to see some of the results of the technology before he died, but I'd love to let him play with a smart phone.  He was an early-adopter of technology, and I believe that he'd have the latest and best smartphone in his pocket.  He enjoyed gadgetry, and when he worked for Mother Bell, he'd go off to schools at Bell Labs, and come back and tell us the wonders of micro switches and computers.

Anyway, I've been playing with this device, and evidently, it's got two cameras.  You can take something called a Selfie.  They're not very flattering, and as we're talking about un-flattering photographs, PawPaw is trying to expand the knowlege base.  Milady's been gone this weekend and when she returned last night, she brought me a hat, given as a joke gift by one of her cousins.  I think it's quite stylish, but I'm not sure where I'll wear it. 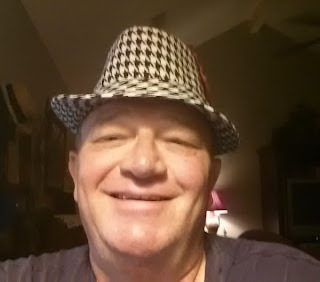 Editing these things is a problem.  The subject matter is lousy and the camera wants to flip the picture on it's side.  For the time being I think I'll stick with my digital SLR.  I understand that camera, and it orients the pictures the way I want them oriented.

Email ThisBlogThis!Share to TwitterShare to FacebookShare to Pinterest
Labels: technology

My S3 arrived last week and as you said, I thought I'll probably not use 10% of it's capabilities. That is changing, however, and one thing I discovered today is the Kies Air app. Slickest wireless-to-PC I've ever seen. I've never been as impressed with a phone as I am with this one. Enjoy.

LOL, all the 'new' technology is designed to be presented on it's side, cause that way the kids can watch the video full screen... :-)