This afternoon after church, my youngest son and I headed to our private range. He was just hired as a Probation and Parole Officer for the State of Louisiana and wanted to do some pistol drills before going to firearms training later this month. So, we went out to Momma's land and set up a target near our berm. I ran him through the major portion of our POST and he did well on it. I'm certain that he'll qualify handily, but he should work on his reloading drills.

After the handgun work was over, we moved back to the 100 yard line with new targets and shot some rifles. I didn't bring a benchrest with me, as I was shooting hunting rifles, both the .308 that will be my primary arm, and a .45-70 that I'll use for the primitive portion of the deer season.

The .45-70 is a Handi-rifle and Louisiana allows them for the primitive hunt portion of the season. I shoot the Lee 405 flat point bullet over a middling charge of IMR 4895. I'm not pushing that bullet hard, preferring to keep the velocity down to about 1300 fps. At 75 yards with iron sights I was able to keep the bullets in a 1.5" group near the bullseye. Certainly good enough for our deer in these woods.

At the 100 yard line, we got out some sandbags and got on the hood of the truck. 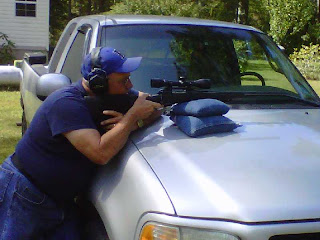 That's PawPaw hisself, stretched out over the truck hood. The rifle is a .308 Savage 11. I shoot 165 Gamekings through that rifle and it's sighted just about 2" above the aiming spot at 100 yards. That bullet is flying about 2600 fps and if it hits meat, it's going to leave a mark. 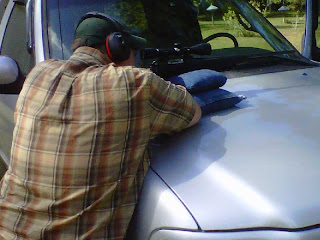 My son wanted to try it, so he fired a group after I was through playing. Interestingly, the way he holds the rifle is different than the way I hold a rifle. His groups are a full two inches below mine, centered closely on the bull. You wouldn't think that it makes that much difference, but it does. Two different guys, same rifle, same ammo, two inches at 100 yards.
Posted by Pawpaw at 4:29 PM

Great news Paw- My congrats to him! I noted the same thing this weekend in Colorado, I put about 5-6 different people down on my M-24 and 3 of the 5-6 shot different POAs than I did...