I've been trying to decide on which rifle I'll use for the opener of the deer season this year, and I believe that I've made up my mind.

The rifle for the early season this year is the Remington 700 ADL I bought this past January. It was built in 1983 and it's chambered in .308. This is the rifle that I used to experiment with Alliant's new powder, Power Pro 2000 MR. The ammo is my handload with the new Alliant Powder and the Hornady 150 grain SST bullet. That new powder drives that bullet to 2947 fps and the group size from the bags runs about 5/8 inch. Off my palm, it opens up to 9/10ths of an inch, which ain't bad for the deer woods. The rifle wears a Leupold VX1 scope. 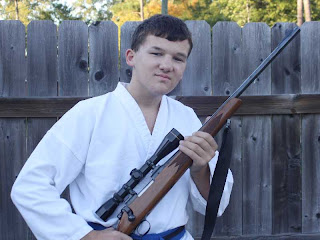 Here, my Grandson Ethan models the rifle so that I can get a picture. He's left handed and knows that this rifle isn't slated for him. He'd rather shoot the Ugly Rifle. I've told him that he's in line for a left-handed rifle. I think that he's old enough to handle his own centerfire and we'll start looking for one soon.

I've fired that rifle enough this summer that I'm very comfortable with it. Just last Sunday I fired a nice under-an-inch group off my palms, no bags, just my elbows resting on a table. That settles it for me. It'll be the Remington until I make meat. Then we'll try with another rifle.
Posted by Pawpaw at 5:42 PM

I haven't figgered out yet if I like 150s or 165/168 in the .308 yet. I came to the caliber late, having distained it for many years after firing so damned much of it through machine guns in the Army. I considered it a commodity.

But I've been playing with the cartridge and I'm getting to like it more and more. The Ugly Rifle likes 165s and the Remington seems to like 150s. Go figure.

I like my groups with 168 vld's over 43 of Varget, but now you've got me looking around for a couple of pounds of Power Pro 2000MR.
I have never had one leave at over 2900 before.
What do you figger the pressure is?

I've always wanted to get a lefty bolt gun. Unfortunately for me, all the bolts I own are military surplus, and neither the US, Sweden, or the Russians happened to make some custom left hand jobs for folks like me.