The Haves and Have-Nots

There's been a lot of news lately from the Occupy Wall Street crowd, about the haves and the have-nots. You'd think that the pore folks in the US were doing... well... poorly, but that's not altogether the case. As it turns out, the pore folks in the United States would be considered rich folks in much of the world, those places that don't have the compassion that we have.

You don't believe me? Go read the New York Times and be educated. It's true! The liberal bastion that is the NYT gets it right once in a while, and what will blow your mind is the chart that accompanies the article. 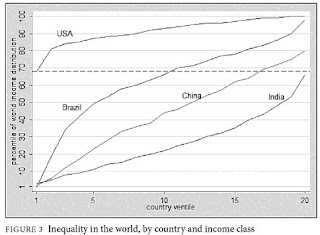 You've got to read the article to get the full benefit from the chart, but basically, the pore folks in the USA have a better standard of living than even the very rich in a country like India.

Now check out the line for India. India’s poorest ventile corresponds with the 4th poorest percentile worldwide. And its richest? The 68th percentile. Yes, that’s right: America’s poorest are, as a group, about as rich as India’s richest.

The USA is a wonderful country, where even the poorest citizen is considerably better off than the rest of the world. When we start worrying about the pore and starvin' we should keep that in mind.
Posted by Pawpaw at 3:33 PM

Poor in America means you may not have a car, although many do. Poor in a third world country means you struggle to obtain enough food to eat.

Judging from the number of obese "poor" in America, availablility of food isn't an issue.