It's been a while since I cooked a jambalaya and I got hungry for it this afternoon. I hied myself to the store and picked up a rotisserie chicken and a pound of sausage, a bag of rice and an onion.

Upon my return home I chopped the onion then started it saute-ing in a little vegetable oil, chopped the sausage and added it to the onion and let that cook together while I de-boned the chicken. Yeah, I cheated with an already-cooked chicken, but I've make lots of jambalaya from scratch. From scratch, I mean that I wrung the chicken's neck, plucked and cleaned him before he was in the pot.

Once that chicken was peeled from the bone, I added him to the pot with the onions and sausage, gave it a stir, then added three cups of rice and three cups of water. Lowered my heat to a simmer, covered it and let it simmer for 12 minutes, until the rice was done. 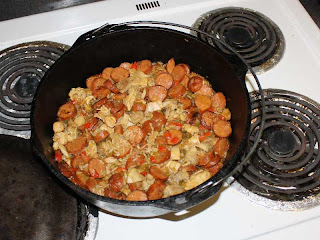 Jambalaya is a Cajun food, made from whatever happened to walk, crawl, or fly past. I've made jambalaya from duck, from rabbit, from squirrel, from shrimp, If you like, you can add raw oysters when you add the water and let the simmering water cook them in the rice. Like most folk foods, it's got its roots in whatever was available in the area to feed a hungry family. It's quick to make, it's flexible enough to lend itself to expanding in case the kinfolks show up at mealtime, and it's filling.

I decided at 5:00 I wanted a jambalaya, went to the store, came back and cooked it, served Milady and washed dishes. I was done by 6:15. Jambalaya isn't something you slave over. It's quick, easy, tasty and something different on a Sunday evening.

And it's ALL good :-) I had dirty rice for dinner!

I do love it, and like you said, it's flexible.

What herbs in that Jambalaya, PawPaw? I have to go to a potluck dinner party this weekend, and think I'll make this up, whilst the gudwife makes up her Seven Bean Stew. Both can be made and transported in slow cookers, and it's a 45 mile slow drive across town, so I'll use an inverter in the truck to keep the slow cookers going on the Low setting, where they each draw only 120 watts or so...

How do you do the Jambalaya? What are the ingredients and other stuff to be prepared? I like to make one for a lot of people.