My second son and I had planned to do some shooting this morning, so we went out to my Mother's place where we have a 100 yard berm.

Matt's rifle is a Savage 111 in 7mm Remington Magnum. They called it the varmint model when we bought it, and it's got the Accutrigger and a heavy barrel in the old pillar bedded stock. We were trying to decide how many rounds he's got through that barrel and as far as we can recall, that barrel currently has about 400 rounds shot through it. Matt had re-adjusted his scope, to compensate for the eyeglasses he currently wears and needed to make sure that the rifle is still zero'd. That rifle has always shot well with our handload of 64.2 grains of IMR 4831 and a 140 grain Nosler Ballistic Tip bullet. CCI Large Rifle Magnum Primers light it all up. 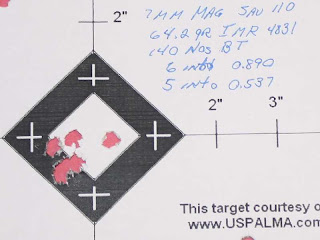 That's a composite target, created by stapling one target over another. The first three shots hit in the lower left of the group, then he adjusted the scope, stapled another target, and fired for the white diamond. Even with adjusting the scope, all six shots fell into 0.890. Each of the individual 3-shot groups are under 0.500. I'd say that rifle is adjusted for 100 yards.

I took my Savage 10, in .243. From the post yesterday I realized that I hadn't fired that rifle since March, 2009 and wanted to make sure that the scope was still looking where the bullets fall. I like my hunting rifles to be sighted an inch high at 100 yards. With the ballistics of this little bullet, according to my ballistic program, it should be within an inch of the aiming point to 200 yards and down just 8 inches at 300 yards.; The longest shot I can make from my deer stand is about 175 yards, so I should be fine with this load. 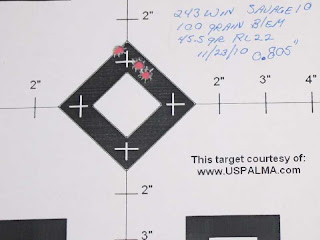 Now, it's time to clean up and run some errands. I've got a lot of cooking to do tomorrow and I'll need to get ready. If I don't talk with y'all tomorrow, have a great Thanksgiving.
Posted by Pawpaw at 11:52 AM

That is some nice shooting on both y'alls parts! And yeah, I'd say that rifle likes that load :-)

Happy Turkey Day to you and yours!