I'm making a potato soup tonite, a recipe I adapted from the Weight Watcher's Cookbook. How did I adapt it? Well, Canadian bacon isn't something that cajuns use a lot of, but Tasso is always in our larder. Tasso is a seasoned smoked pork product, much like Canadian bacon, ham, or bacon. We use it a lot in cooking, much like others use chunks of ham, bacon or salt pork. 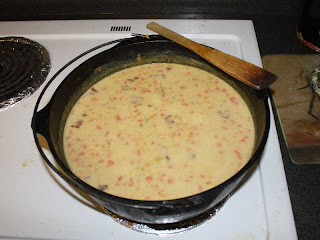 In a big pot, combine potatoes, tasso, carrots and chicken broth. Add enough water to cover everything. Cook on a medium fire (turn it down after it simmers) until the potatoes are cooked through. Actually, you want the potatoes to start falling apart, so three or four hours isn't too long. About fifteen minutes before you serve it, add the milk products. Salt and pepper to taste. Serve with shredded cheese and saltine crackers.

Serves about eight.  You're gonna love this stuff.
Posted by Pawpaw at 7:06 PM