When reloading, it's important to pay attention to overall length. It's important when you want ammo that works. For example:

I'm a fan of the .357 magnum cartridge. All of my revolvers are chambered for either .357 magnum or .38 special. Recently, a bunch of us from over at the Cast Boolit forum made a group order for a special bullet mold. The mold in question is a custom Lee 6-hole mold that throws a tumble lube, .358 inch, 180 grain, flat point, gas checked bullet. It's a big ole bullet with a wide flat meplat. It was designed for the .35 Remington rifle cartridge, but I thought it might be the bees knees in the .357 cartridge.

It's a good looking bullet and last week I finally got around to loading some. I used Alliant 2400 powder and a CCI primer, trying to get a load that would fly at about 1300 fps out of my revolver. After I had loaded a couple, I thought they looked a bit long, so I picked up my SW Model 66 and loaded a couple into the cylinder. They fit fine, and weren't too long for the cylinder. Great! I loaded the remaining brass and set them aside.

This morning, I took another revolver, My SW 27 6", my Marlin 1894C, that loaded ammo, and went to the range. Imagine my surprise when I loaded a cylinder and had the cylinder lock up as soon as I closed it into the frame. A quick survey of the problem showed me that the ammo was too long for the cylinder. Of course, you can click on the picture for a bigger view. 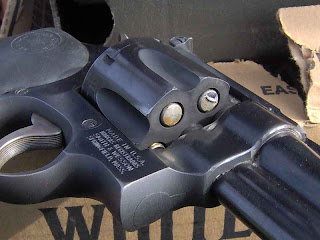 I was considerably surprised at this development. The ammo fit fine in my K-frame Model 66, but wouldn't fit in my N-frame Model 27. I figured that SW chambers would be the same length, but I'd obviously be wrong about that. So, while I thought about how to get my cylinder un-stuck, I tried to run a few rounds through the Marlin lever action. The ammo was too long for that action, too. It wouldn't feed. Some more reloading was obviously in order, with the bullets seated more deeply in the cases.

The rangemaster at the range carries a K-frame SW Model 13, which is a close cousin to my Model 66. I asked him to try the ammo in his revolver and it fit just fine. 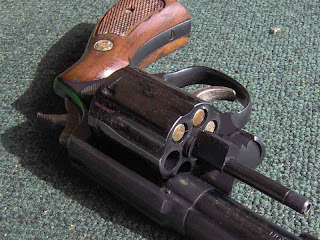 He ran a cylinder through and it shot surprisingly well in his revolver, turning in tiny groups. So, I gave him about 30 rounds, rather than having to pull the ammo down. He can shoot it and he'll return the brass at some point in the future. He says he might do some late season deer hunting with it, and it'll be perfect for that role.

Afterwards, we took my locked-up revolver to his shop and I whacked the cylinder with a rubber mallet. It opened and we got the ammo out. Again, I was considerably dismayed at this development.

I came home and measured the cylinders of those two pistols for total length. Both the M66 and the M27 cylinder are recessed and both barrels are pinned. The Model 66 cylinder length measured at 1.672 inches with my calipers. The Model 27 cylinder measured at 1.623 inches. That's almost five-hundredths difference in the two revolvers, and the small K-frame has a longer cylinder than the larger N-frame. The loaded cartridge, interestingly, measured at 1.662, which is over the SAAMI length, but it fit and functioned in the K-frame. I'd have thunk that all Smith and Wesson .357 cylinders were the same length, but I'd have been wrong. That's not a mistake I'm likely to make again soon.

I'll reload some more and pay attention to my OAL. This is a lesson I don't intend to repeat.
Posted by Pawpaw at 2:24 PM

Thanks for a worthwhile and cautionary anecdote.

D, is this the same mold Ranch Dog is selling?

If it's not the mold that Ranch Dog sells, it's close. Darned close. It's got the Lee RF nose, LLA grooves, and it's gas checked. When I bought this one it was supposed to drop a 180 grain bullet. I haven't weighed any, so I don't know. It looks a lot like the TLC39-190-RF that he sells. It might be.