It's a pawn shop rifle and I picked it up for a good price. Before I started making ammo for it, I took it down, gave it a good cleaning and floated the barrel. Ruger puts a little ledge on the forward end of the stock to put upward pressure on the barrel. Everything I had read told me that floating the barrel would go a long way toward making the rifle shoot.

I picked Sierra Gameking bullets because this rifle is going to be a hunting companion. Gameking's are a standard boat-tailed spitzer bullet of conventional construction. Because the little cartridge is overbore, I figured that a slow burning powder would be best and the Alliant guide told me that Reloder 22 would be a good place to start.

So, I loaded some 117 grain Gameking bullets over varying charges of Reloder 22. I started at 49 grains and worked up to 52 grains at one grain intervals. I didn't do anything special to the Winchester brass other than full-length sizing and camfering it.

When I got to the range today, the weather was drizzling rain intermittently, but the wind was dead calm. Temperatures were about 60 degrees. I set up some sand bags and began at 25 yards. The scope was close, about an inch low at 25 yards, so I took the target out to 100 yards and settled down behind the scope.

This rifle wears an old Tasco fixed 6X scope. I like fixed power scopes on hunting rifles. My Savage .30-06 wears a 6X Weaver. I was pleasantly surprised that the old Tasco was as clear as it was. The targets were 2" target dots and they were easily viewed through the glass. All targets were three-shot strings with the rifle allowed to cool 5 mintes between strings.

This target, below, was shot with 50.0 grains of Reloder 22. When I looked through the spotting scope, I was pleasantly surprised. 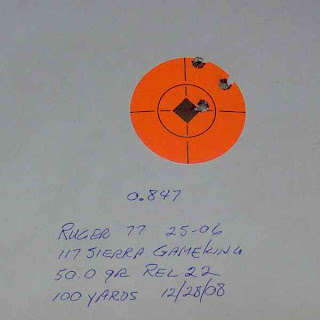 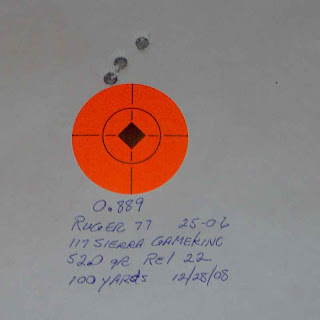 That's also a fine target, and it's considerably narrower than the one above. I may have pulled that last shot, throwing it high. The width of that group is just over a half-inch, but the height of the group makes it almost 9/10ths of an inch.

Still, the little Ruger is a shooter. With both 50.0 grains and 52.0 grains of Rel 22 it turns in fine accuracy. I didn't put anything over the chronograph today, but my data tells me that both loads are running on the far side of 2800 fps.

I think I'm going to like this rifle a lot.
Posted by Pawpaw at 3:38 PM

That's a fine load, with a great bullet. Try also Sierra's fine 120g GameKing, which has a HP. Sierra says that the HP versions of their GK bullets are slightly "harder" than the SP versions in the same weight and caliber. If you were to develop a load for big deer, hog, or even elk (yes, I'd take a .25-'06 with that bullet for elk), that would be your ticket.

I've lately switched my preference from 100g to 117/120 in the .25 caliber (.257 Rbts, in my case), due to the edge in penetration and knockdown that it gives. But I will say, if your goal is varminting and small whitetail, the .257 caliber shines in 100g. It's inherently accurate, has very, VERY little recoil, and puts down Texas whitetail like an OFF switch. We've used the Speer 100g, the Nosler Ballistic Tip 100g, and the Sierra 100g. The interesting thing that we found about the quarter bore with that weight was that, as we turned up the velocity, the accuracy just kept improving.

Let us know about your adventures with that load. LOVE the range/reloading reports, PawPaw.