I went out to the Woodworth range this morning to try out the Model 28 and the 1894C with the re-engineered TLC 358-190 RF bullet. After the debacle where I hadn't seated the bullet deeply enough, I took great care to insure that the loaded cartridge would fit in both the pistol and the rifle. The results were worth it. 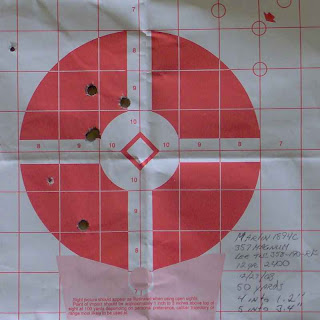 That's four shots into 1.2 inches at 50 yards, with a called flyer opening up the group to 3.4 inches. This isn't bench work, this is off-the-elbows work with iron sights. It's interesting to note that the orange circle is six inches in diameter and that my front sight completely subtended the circle at 50 yards. So, the load is shooting into the front sight.

I took grandson Michael, 11 years old. He started on pistol work this morning, shooting the Ruger Mark II. He expended all of PawPaw's .22LR ammo working the little pistol. I didn't pester him about technique, just gave him some basics and watched over him for safety. He understands the Four Rules and is generally very safety conscious. Still, it was his first time with a handgun, so I watched him like a hawk. 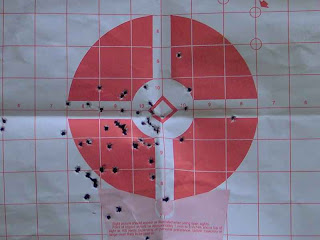 That's four or five magazines at 5 yards. His technique could use some work, but this was his first time with a pistol and his first time with iron sights. I think he did okay. We talked about the difference between irons and scopes all the way home.

It was a memorable morning for the both of us.
Posted by Pawpaw at 1:40 PM

Good shooting! I took my 10 year old grandson to the range earlier this week- same pistol and just about the same results :-) I did put the target back to 50 feet for one try, he hit it 2 out of 3! Now he wants me to come back next month and go again...