I took the little Savage 93R17 to the range today along with the Ruger 77. While I shot one, the other rested.

I'm going to like this little rimfire, although it needs a better scope. The little 2X7 that's on it is a low-end scope and it didn't seem to have good definition. The target wasn't sharply defined, always seemingly a bit out of focus regardless of how I'd set the focus ring or the power settings. The little rifle deserves a better scope and it'll get one in the spring.

Still, the rifle was surprisingly accurate, capable of one-hole groups at 25 yards and sub one-inch groups at 50 yards. At 100 yards the group really opened up, but I think that's a function of the scope more than a failing of the rifle. We may have had parallax issues at 100 yards, which certainly mitigates against good shooting.

Still, at 50 yards I wouldn't be uncomfortable taking a shot at small game. I was using one-inch target dots against white paper and a representative five-shot group looks like this. 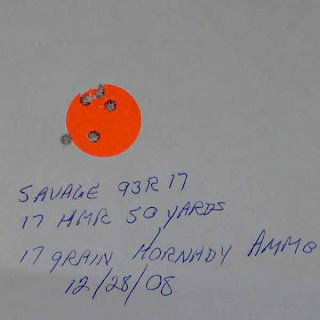 That's with the 17 grain Hornady ammo. I'll have to get a box of the 20 grain stuff, and try the Remington and Federal ammo, but so far I'm pleased with this little rifle.