No pictures today.  We set the range up after lunch, and two grandids wanted to shoot, so I put the timers on practice mode, make sure that the teenagers were safe, and their Dad and I sat on the deck while they practiced.

In just a few minutes, one of them sang out.  "PawPaw, something is wrong with this gun.  It's free-wheeling."

"Clear it and bring it here."

He was shooting my Uberti Cattleman, the clone of the 1873 Peacemaker.  Sure enough, the bolt wasn't coming up to lock the cylinder.  So, son and I took out the screwdrivers and looked for the problem.  As it turns out, the bolt/sear spring had turned loose.  As far as I know that's the spring that came with the gun, but the spring broke at the ... well... a picture is worth a thousand words 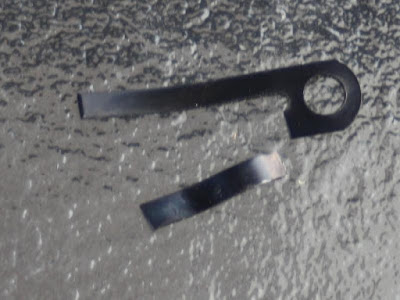 Luckily, I had a couple of spares in my kit, so we took one out and replaced it.  Put the gun back together.  The bolt wouldn't come up.  Damn.  Took the gun back apart, the replacement spring had broken in exactly the same spot.  In fairness, these were older springs and the replacement has a few dabs of spot-rust on it.

I had another that looked newer, and we used it.  As of now, the Uberti is running fine, but there seems to be something about those flat springs that breaks at that spot.

With the gun running, they shot up all the ammo I had loaded (grandkids are bad about that), then their parents scooped them up and went home.

I'm out of sear/bolt springs, so I went to MidwayUSA to look for some Wolff springs.  Wolff makes a darned fine wire spring rather than the flat spring.  The spring shooting season is coming up, and even though that particular revolver is my back-up, I need spare springs.  And, of course, they're on backorder. Well, Damn.  I went to Brownells, and they're backordered there too.  I'll wait a couple of weeks and see if they come off backorder, then I'll get a half-dozen to put in the spares kit.  If not, I'll order them directly from Wolff.

Some folks don't think that shooting wax, like we do, is hard on a  revolver.  The simple fact is that we're pushing that lockwork fairly quickly.  Every CFDA shooter I know has learned a little bit about gunsmithing simply because our guns break.  Milady and I have put about 10,00 rounds downrange this year.  We're snatching hard on the hammers and running them quick.  And, our round-count is probably a little less than a lot of the really competitive shooters. When you're coming out of the holster, cocking and firing in less than a half-second, you're pushing those springs pretty quickly.  Do that several thousand times and something is bound to turn loose.

But, in the final analysis, all the revolvers are working right now.  The spring shooting season is upon us and the guns have to be ready to take a beating.  We're running them hard.
Posted by Pawpaw at 5:03 PM

I think I'd have a 'reloading' party the next time... :-) And you do have an excellent point on the guns being run hard!

I called Wolff because I wanted a recoil spring for an older Kahr, and I could not quite figure it out from the website. An actual human answered the phone and was knowledgeable and patient. And he was still patient when I called back two seconds later for the second question I forgot to ask. Great company to deal with.