Talking with my son this weekend, he asked me to tell the story about Willie.

The small town of Chinquapin is a mythical town in northwest, LA.  Celebrated in movie and song, it's home to about 20, 000 souls and everyone in that area knows where I'm talking about.  PawPaw spent his early law enforcement career in that town, working as a parole officer.

One of the folks that PawPaw had under supervision was a small-time crook named Willie.  Willie ws a black man, in his early 30s.  He stood about 5'6" tall and had about half the teeth that God had originally given him.  He was't violent so much as opportunistic.  If he saw something laying around, he'd steal it.  If he saw an open door, he'd walk through it.  That's what got him sent to the pen in the first place, and that's the predilection that made him the subject of this story.

Willie was in jail, yet again, for stealing.  Willie was well known to the jailers and the criminal system in general, so while awaiting trial. (He couldn't make bond, because of a parole hold). So, the jailers made him a kitchen trustee.

The jail, like many others in the early '80s was atop the parish courthouse.  One elevator led to the jail, directly from the main hallway of the courthouse.  Like many of those old courthouses, it had been built in the '30s, an imposing building with white limestone exterior.

That jail elevator was about 50 years old, and had been updated over the years, but still had problems from time to time, as all old elevators do.

One day, about 3:00 in the afternoon, Willie was out of his cell, helping clean the kitchen and get ready for cooking the evening meal.  As he walked down the hallway from his cell to the kitchen, the elevator door opened.  Willie, being the opportunistic fellow that he was, stepped into the elevator, pushed the button for the first floor, and rode down to the main hallway of the courthouse.

Back in those days, deputies worked eight hour shifts.  The standard shift was 7-3, 3-11, and 11-7.  So, at 3:00 pm, we had an outgoing shift and an oncoming shift.  That was exactly the wrong time to make a jail break, because there were two shifts of deputies at the courthouse.  So, when Willie stepped out of that elevator at 3:00 pm, he noticed two shifts of deputies milling around in the Sheriff's office across the hallway.

The deputies noticed him too, and the footrace was on.

Willie ran out the front door of the courthouse and turned left, for reasons only known to him.  Two blocks away, Willie came to a bridge.  It looks just exactly like this. You can click for larger, and you'll notice a parking lot under the bridge. 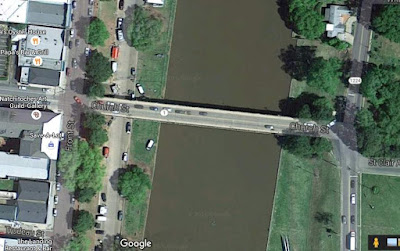 Witnesses say that Willie executed a beautiful, technically perfect swan dive off the railing of that bridge.  With cops two steps behind him, the witnesses claim that it was glorious to behold.  Willie took a flying leap onto the bridge railing, set his hands outstretched for a classic swan dive and leapt into the air.  His hands folded over his head, his feet came up over his head as he dived headfirst.

Directly into that parking lot.  Luckily the asphalt is only about 20 feet from the bridge railing.  The chase team called for an ambulance where they scooped him up and took him to the hospital with multiple bone-breaks and a fairly severe concussion.

PawPaw interviewed Willie several days later.  He had a massive, turban-like head bandage and casts on hoth arms that went from the elbow to the fingertips.

"I thought I was good, Mr. D", Willie replied.  "I thought I had made it, right up to the time I felt my fingers breaking."

I thought of the old Gte Smart TV series. "Missed it by that much".

Well, you've got to admit there isn't a lot of time to think between the jump and a 20-feet-later uh, "landing"?

"You can't fix stupid." But in America, we let stupid vote, and stupid's vote counts as much as your vote and mine. Sigh.