It's been a while since I posted a dawg photo, and he's whining this Sunday morning, wanting to go pester his cats.  Of course, he's already been outside twice this morning in the pre-dawn. 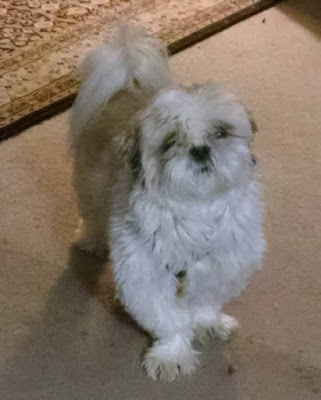 PawPaw is trying to catch up on the Sunday news via internet, before the dead-tree paper arrives.  It'll be another hour or so until the paper gets here.  In the meantime, I've got a pork butt in the slow cooker that will be pulled for sandwiches at lunch.

I hear that there is a football game later, but I doubt I'll watch it.  I don't have any dogs in that hunt. The kids are coming over for lunch and I bet that we'll be shooting wax in the back yard.

Tomorrow we'll get back to regular programming.  I'm enjoying these parolee stories and trying to decide if I want to talk about Pinky or Willie first.  Both of them were colorful characters.
Posted by Pawpaw at 6:24 AM

Email ThisBlogThis!Share to TwitterShare to FacebookShare to Pinterest
Labels: the dog