In the previous post, Old NFO makes a comment that he claims is a nitpick, but I'm not sure.


The only thing that would worry me is that left hand being out ahead of the muzzle... That's a nitpick, I know.

That's a good point, and I'll have to ponder that.  It's part and parcel of the game, ans we see a lot of shooters pushing that off-side hand out in front of them as a counterweight.  Our game is a game of milliseconds and tiny angles.  When you start doing the math, it's amazing that we hit the target as often as we do.  We have rules on holster angles, but nothing that tells us how to stand, so lots of folks have experimented and lean backwards a bit to increase the angle of the holster in relationship to the target.

For example, this little cartoon shows a very familiar sight. 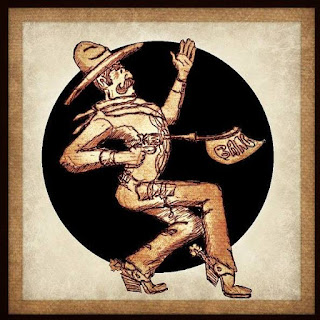 And there's that off-side hand acting as a counter weight. 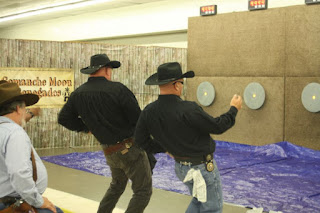 Some of the guys lean back so far that it looks like they're doing the limbo.  Everybody has to find their own style and their own comfort zone.  It's true that our hand is out in front of the muzzle, but I don't believe anyone has brought that up as a safety issue.  I do the same thing, I get that hand out front as a counterweight so that I can get just a degree or two more angle on that holster.

I'll have to ponder this some more.

Seems to me a cane in the off hand and placed behind you would allow an even greater lean and get that hand out from in front of the muzzle. Maybe that is why Doc Holliday carried one?