Instapundit points us to an article at the Daily Mail, telling us that St. Louis, MO has surpassed all others as the crime capital of the US on a per-capita basis.


Compiled from data released by the FBI charting crime in the first six months of 2015, the 'Gateway City' is followed by Memphis, Tennessee, Detroit, Michigan, Birmingham, Alabama, and Rockford, Illinois, to round out the top five.
The violent crimes listed by the FBI include rape, robbery, aggravated assault, and murder

This ties in nicely with a National Review pictorial, showing the party affiliation of the mayors of the most crime-ridden towns. 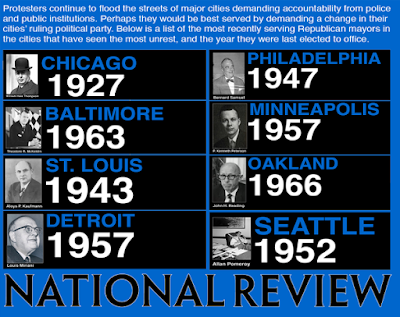 Reading down through that Daily Mail article, which gives a list of the most crime-ridden city in each state, I see Louisiana's very own New Orleans.  Variously described as a third world hellhole, it's also known as a bastion of the Democratic Party in Louisiana.  So, I clicked over to the Wikipedia page to see when the city last had a Republican mayor.  As it turns out, the last Republican mayor of New Orleans was a fellow named Benjamin Flanders and he left office in 1872.  Since then, it's been one Democrat after another.

The current mayor of New Orleans is Mitch Landrieu, of course a Democrat, and the city council is filled with Democrats.  New Orleans has recently been in the news for wanting to remove Confederate monuments from the city.    I'm sure that removing the statue of Robert E Lee from Lee Circle will immediately quell the criminal element in the city, making New Orleans a beacon of hope, justice, and fairness.

Or not.  Perhaps the city council and the mayor should focus on real problems.  But that would lead to insufficient opportunities for graft.
Posted by Pawpaw at 7:53 AM