We got to Gainsesvile, TX last night and eventually found our way to the range this morning.  (Texas frontage roads drive me crazy.  They're unlike anything I'mused to .)

Still, we made it to the range and got set up for some specialty shoots.  The first was Texas Hold'Em, where a shooter sits at a table with cards in his hand.  At the light, he drops the cards, grabs his revolver off the table, and engages the three targets before him. 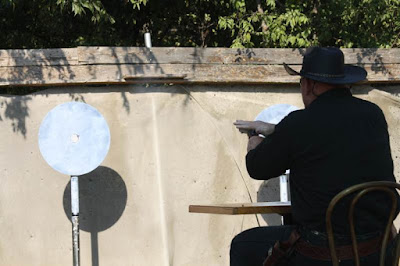 Here's our own Big Mark from the Thorn Valley Shootist Society engaging targets at Texas Hold'Em. 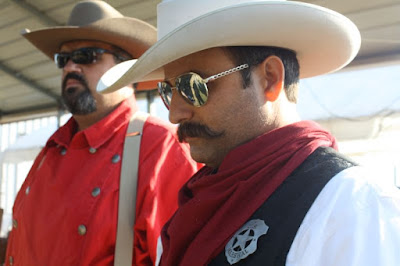 That's Red Rock in the red shirt, and Part-Time in she shades.  Good friends from the Big Thicket Bushwackers in Silsbee, TX, and it was good to run into them.

Ever time I go to one o these shoots, I earn something.  Part-Time is a pretty good Vaquero gunsmith and when something went sideways with Zachary's Vaquero, he diagnosed it, got out his dremel tool, and fixed it.  As it turns out, there was a problem with the pawl ratchet, especially on guns that are dirty.  Part-Time put a reliability fix on it, and it's running smooth as silk now.  I also had him put the same reliability fix on Milady's revolver while he had his tools out.  Fifteen seconds putting a bevel on the pawl and life is good.

We're having fun, cutting up, telling lies and laughing a lot.
Posted by Pawpaw at 2:36 PM

Glad y'all are enjoying the trip! Shoot 'em good!