I talked yesterday about the nuttiness that was starting to follow David Gregory's brandishing of a standard magazine on Sunday's Meet the Press.  Professor Jacobson, over at Legal Insurrection is doing yeoman service and heavy lifting in this story, and he's demonstrated that the Washington DC police told NBC that they couldn't use that magazine, but Gregory went ahead to use it as a journalistic "gotcha" moment during his interview with Wayne LaPierre.

Gregory knew what he was doing was illegal.  He decided to go ahead for his own purposes, probably thinking that his high-minded moment would shield him from consequences.  He was dreadfully, dreadfully wrong.   If he is arrested and prosecuted for having that magazine, then he'll know that we're a nation of laws, not men.  If he is not arrested and prosecuted for having that magazine, then everyone in DC who is found with a magazine like that can claim the David Gregory defense.  The law cannot be arbitrary and capricious in its application.  It must apply to everyone, equally.  That's the basis of our system, and Gregory's moment might set back the very movement that he's trying to push forward.

Martin Luther King was willing to break laws to demonstrate how unjust those laws were, and to suffer the consequences for breaking those laws.  I doubt that was Gregory's purpose.  However, I see that a prominent conservative lawyer has volunteered to defend Gregory on the charges.  He might be able to demonstrate that the DC laws are in violation of the Second Amendment.   That would be a truly ironic moment for Gregory, and NBC News.  While arguing that standard magazines should he illegal, he manages to overturn the very law that he's trying to stiffen.  Unintended Consequences.  That's generally what gun laws are all about.

UPDATE: At 9:30 a.m., Insty says that this picture is all over Facebook. 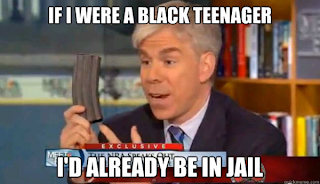