I awoke this morning with plans for the day. Playing in the woods with my grandsons. I went outside and fixed a flat that had appeared on Milady's car yesterday, re-stowed the spare and returned everything to normal. Then I went out to the bath-house to pack an ice-chest for the days outing. Found a terrible sewerage problem that entailed a trip to the hardware store and much cussing while clearing a clogged sewer pipe. Reseated the toilet in the bath-house with a new wax ring, then went to the lease. Had fun. Took a .410 shotgun and let the boys shoot at cola cans. Completed some instruction on basic gun safety and peppered the cans with birdshot. 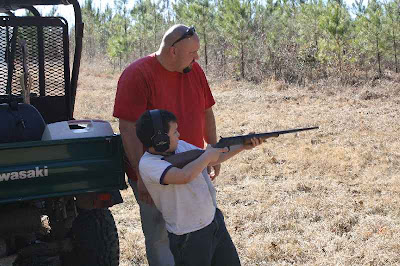 On the way home, we stopped by Dairy Queen and had a blizzard. Got home and learned that Milady's truck wouldn't start. Went to Auto-Zone and bought a battery. Installed same. Cleaned shotgun. Kids went home.

But you DID get some shooting in... :-) Recoil therapy works wonders, as does time with grand kids!

Sewer AND two broken cars? You are amazing, PawPaw. For me, a day like that would require rescuing by aid of a decent Scotch.

On the other hand changing a flat and installing a new battery are not all that bad without rain running down your neck. And yes, .410's and Grandkids do tend to make for a cheerful day.

"Recoil therapy," huh, Old NFO? I gotta remember that one! It's a good one!