With the Super Bowl just a week away, we're told that the NFL is trying to say that they own the "Who Dat?" rallying cry of die-hard Saints fans.

I doubt that opinion will stand a challenge anywhere in any Court. The Louisiana Democrats want Governor Jindal to file suit.

The Democrats' governing body Saturday called on Jindal to defend the rights of Louisiana citizens to use the term "Who Dat" and the New Orleans Saints' fleur-de-lis symbol.

And in the linked article, the reporter gets it all wrong. Who Dat is a Louisiana euphemism that pre-dates the Saints, but when you start talking about the Fleur-de-Lis symbol, you've gone way too far. That isn't a Saints logo, it's a Louisiana logo. It came here with the Acadians and it's been univerally adopted by Louisiana. My sons put the Fleur-de-Lis on decorative ironwork, people hang them on walls, we embroidery they into fabric. 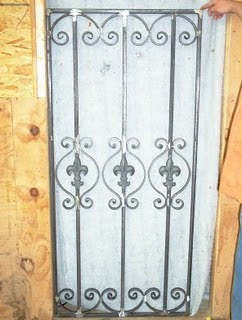 The NFL is dead-wrong on both symbols. They appropriated them for their use, they've got no right to them. They're both in the public domain.

I'm still not a Saint's fan, but if Whatsisname Benson wants to get a little goodwill back, he'll tell the NFL to Shutthehellup. 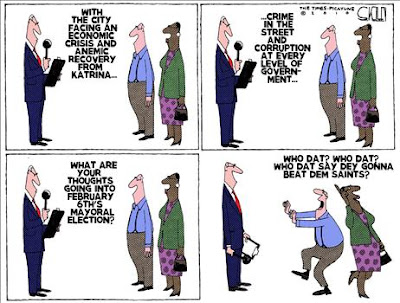 On a more local note, the bigger question becomes how the mayor's race will fare in the face of all the Super-Bowl hype. The mayoral primary is on Saturday, February 6, 2010 and the game is on Sunday, February 7, 2010. Turnout is always a big deal in Louisiana elections, and I'd feel pretty safe in saying that the electorate is just a bit distracted right now.

There will be some interesting politics going on in the Big Easy this week. I'll be watching The Oyster for informed commentary.

Hat tip to Mostly Cajun for the cartoon.
Posted by Pawpaw at 4:31 PM

Re: Whatsisname Benson: keep in mind that Benson faced a player-only payroll of about $2,000,000 a week, and he had no place to play and no people to come to the games if the Saints played them. I think anyone would have panicked.

Jr. I didn't sign the player contracts. He did. With a full understanding of the conditions. The man's a businessman and should have known better. I bet this time he's got a bail-out clause if the Dome washes into the Gulf.

Don't ask me to feel sorry for Benson. It ain't happening.

Figures... the NFL is pissing money right and left and trying everything they can to stop the flood. Of course if they go down that road, I wouldn't recommend Godell coming to anymore games in NOLA...

>Don't ask me to feel sorry for Benson.

I didn't. And I don't either. Just understand the reasons behind the man's panic after Katrina. The most astute businessman ever born couldn't have predicted the near total destruction of an arena and a city.

hell, the NFL never wanted the copyright to the "Who dat" all the years that the saints were losing!