Those half-dozen regular readers know that over the Christmas break, I lucked into a Ruger New Model Super Blackhawk. I haven't even fired it yet, but today I did load some ammo for it. 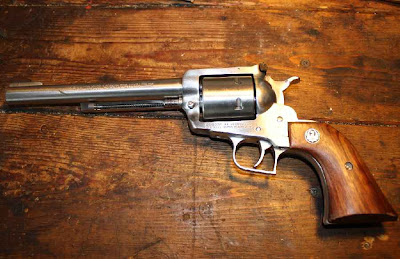 For the very first time, I used Wolf large pistol primers. I had read that they were dependable primers, but I might have trouble seating them. I had no trouble at all. I use a Lee Auto-Prime. I've head that little tool for almost 20 years and never had a lick of trouble from it. It's primed thousands of cases with nary a bobble.

All the reading I've done on the .44 Magnum indicates that Alliant 2400 is one of the go-to powders for the caliber. I happened to have a pound of that on my bench and last week I had cast a bunch of 240 grain semi-wadcutters. I looked in the handbook and found a load that should give me about 1300 fps from that bullet without exceeding the maximums. 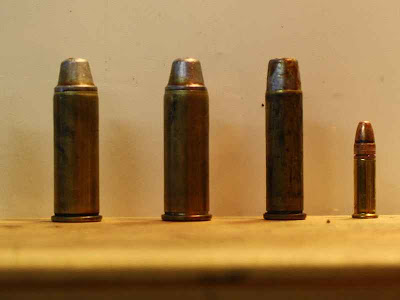 Those two on the left are .44 magnums, with a .357 I loaded yesterday and a .22 Long rifle for scale. I started with 240 grain bullets because those are traditional in this caliber. I've been looking at the Lee 310 grain flat tip bullet (C430-310RF) and I might have to buy that mold this summer. I'll get used to the pistol with the 240 grain ammo and make up my mind later.

I'm not sure if I'm going to like the .44 magnum. I've always been a .357 guy and bought this pistol mainly because I got such a good deal on it. However, two of my sons are drooling after it, so if I decide to turn it loose, all I have to do is draw straws. The third son hasn't seen it yet, so there might be three lusting after it.

I haven't been to the range since before the hunting season. I'm ready to spend a good part of Saturday morning testing loads and seeing some friends I only see at the range.
Posted by Pawpaw at 4:51 PM

can't wait to hear the range report on this one.