When I get up to make coffee in the morning, likely as not it's still dark outside. The dog sleeps in the laundry room and he'll commence whining, wanting to get outside of his little room. So, I pick him up and put him outside so he can do his business while I continue making coffee.

After a suitable period, he starts whining again to come into the house. It's heart-rending, pathetic whining that's calculated to tug at the heart strings and prompt a human to open a door. I ignore it.

In this snapshot, he sits outside whining to come inside. As I type this post, he's whining still. 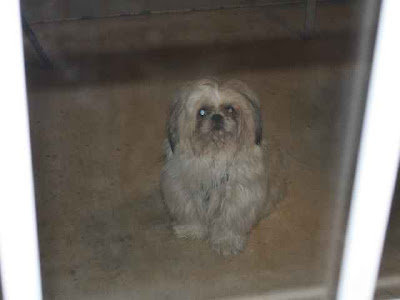 UPDATE WITH EXTRA BONUS PICTURE: The dog got a haircut on Saturday. I went to the range and when I got home, Milady was shearing him. He seems to enjoy it. This picture shows him cavorting after being released. He looks a little uneven, but it'll grow out. 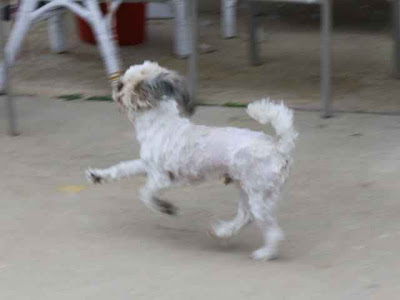 Email ThisBlogThis!Share to TwitterShare to FacebookShare to Pinterest
Labels: the dog

whats the difference between a good haircut and a bad haircut? about two weeks

I love it!!! He looks just like his pomeranian cousins in Tennessee when I get through with them!