I don't think he wrote the tweet, but whomever is writing in his name made some weird choice of pronoun 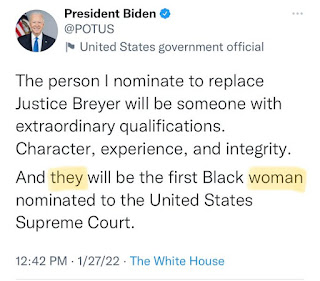 Going back to basic English education, they is third person plural and indicates more than one person.

Is he planning to nominate a group?  At this point, he only gets one pick. Odd choice of pronoun.

As it stand, she will be the first affirmative-action nomination.  When you boil it down to race and gender, it is not abut qualifications, it's about race and gender.  That is inescapable.

That she will be a liberal is also inescapable.  I'm sure Joe could find a qualified conservative to nominate, but his base would go insane.  Presidents should be very careful in vetting their nominees.  GWB thought John Robers would serve as a conservative, but his record is more of simply being a political squish.  I deplore the man.  And, from what I've seen of Kvanaugh, he ain't much better.

My pick for SCOTUS is a textualist.  One who reads the text of the Constitution and rules on the basic meaning of the document.

Heard on a talk show almost a quote: Who is going to be the first one to vote against the first black woman to the Supreme Court in history?

So goes the apparent game plan for choosing the best/most qualified. But then that went out the window with Sotomayor.