We finished up the Thorn Valley Invitational this morning, and it was a bittersweet experience.  We've been shooting in an old barn at the Rustic Sky Horse Camp for over three years, and it was a great place to shoot.  Unfortunately, their business is growing and they needed the space for other things, so we got evicted.   But, the owner told us several months ago, and was gracious enough to let us hold our final shoot in the facility before we had to leave. 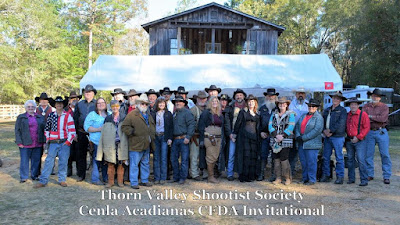 Thirty shooters from four states, and we had one heck of a time   We shot the main match yesterday, a 4X match.  We did the ladies as a last-gal standing, and it came out about like you'd expect.

When we got down to the proper point, we did a Magnificent Seven for the mean, and  there were a couple of surprises there.


This morning, we went to the cook shack and ate breakfast, then assembled at the barn for some fun shoots.  We shot doubles, and Five Card Draw, and I'll post pictures of those later.

Then we broke down the range and got it ready to transport to its new home.  Thorn Valley is moving south about 12 miles to a new home in Big Mark's barn, and the Cross Branded Peacemakers are building a new range at Maor D's place.  That old barn spawned two clubs and is the birthplace of CFDA in Louisiana, so it was a sad time to seep out the wax for the last time.

That's great news! Proud of y'all!