Good Luck With That

You gotta love the flat-earth folks.  If nothing else, they provide us with endless mirth.


“Mad” Mike Hughes is a bit of a conundrum. The 61-year-old doesn’t believe in science, but he plans to launch himself over a ghost town Saturday in a self-made rocket that he built over the last few years, spending over $20,000. He plans to one day create another rocket that can leave earth’s atmosphere so he can prove that the earth is flat.

He doesn't believe in science, but he's going to launch a rocket.  To prove that the earth is flat.  Good luck with that. 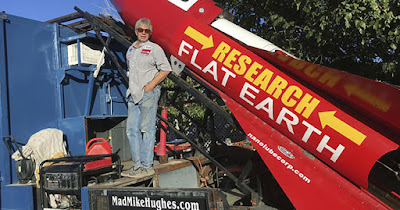 But, he's willing to put his money where his mouth is, and he's willing to entertain us in the meantime.  I wonder what he's going to do when he gets high enough and sees the curvature of the earth?
Posted by Pawpaw at 12:00 PM