Last night at the auction, I was browsing the tool table and noticed a familiar outline.

A bullet mold, but what does it throw?  A quick inspection reveled it to be a Lyman block, with handles, and it had a pistol bullet,cavity  about .45 caliber.  The blocks were dirty and I couldn't see the mold number, but I figured it was worth a chance.  I told the auctioneer, who was standing nearby, that when the blocks got to his hands, I'd open at $25.00.

Then, I was in a quandary.  My eyes aren't calibrated to the thousandth, but I knew that the cavity was either a .44 or .45 caliber block and that the mold would throw a semi-wadcutter bullet with two lube grooves.  I've got a .44, and I've got a couple of .45 ACP, but if the mold threw a bullet for the .45 Long Colt, I'd have a mold block with no pistol to match it.  Still, at $25.00, I figured it would be a good deal, and I could use it for trading material.

Later, when the auctioneer cane to the tool table, he picked up the mold and announced, "I've got a twenty-five dollar opening bid on this bullet mold."  Nobody said a word.  "Going once, going twice, third and final offer....  Sold for twenty five dollars."  He handed me the blocks.

I found a rag and started looking for the mold number under a decade of bench dust.  452460.  I quick Google on my phone revealed tbe mold to be a semiwadcutter for the .45ACP, a 200 grain bullet. 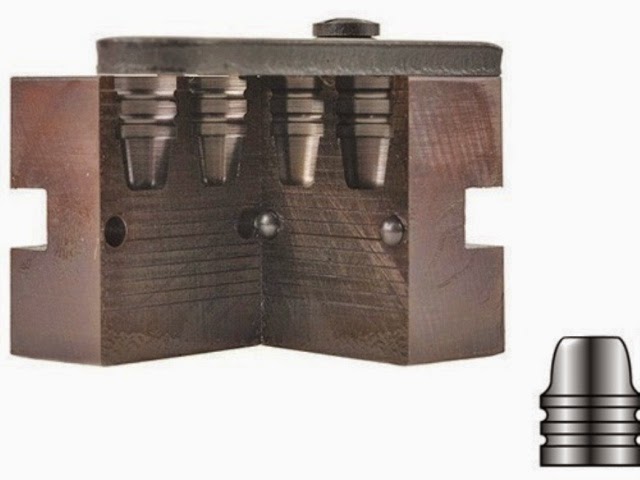 Well, heck.  That looks like a nice bullet, and I've got a couple of 1911s that might shoot very well with that bullet.  Some of the usual forums tell me that with 4.0 grains of Bullseye, that bullet cuts a nice round hole, and often throws them in a single, ragged hole.  We'll have to see about that.

You did a little better than OK,my 1911 loves that boolet.

You did well, sir.

Those handles look like LEE, not Lyman. Good handles, though, and suitable for multiple hole mold blocks.

Dynamite buy, you did well.