The guys over at this forum were talking about cannon projectiles, artillery, if you will, and trying to identify a common antique projectile.  First, the caveat; these things might be dangerous.  They were originally designed to hurt people or destroy materiel and they might explode.  GIs of all stripes bring stuff home from their service, and we hope that when Grandad brought home that war relic, he didn't bring home something that might detonate and destroy the house.  That having been said, lots of that stuff is totally inert and if you trust Grandpa, then whatever he left behind is probably safe.

There is a thing in artillery called a shot cartridge.  No, it's not a shotgun shell like we commonly hunt birds with, it's a solid metal projectile that is totally inert, but is supposed to punch a big hole through something.  That big metal projectile is called shot, and are commonly used in track and field events across the world.  A 12 pound shot is what "shot put" is all about, and early artillery was designated by the weight of the iron ball that would fit down the bore.  A 12 pounder cannon fired a 12 pound ball.

Like most GIs, PawPaw dragged home a relic, and it sits in my shop.  Can you spot it?  Many people don't.  Most folks don't realize it is there, and when they do spot it, their eyes grow wide.  What is that? 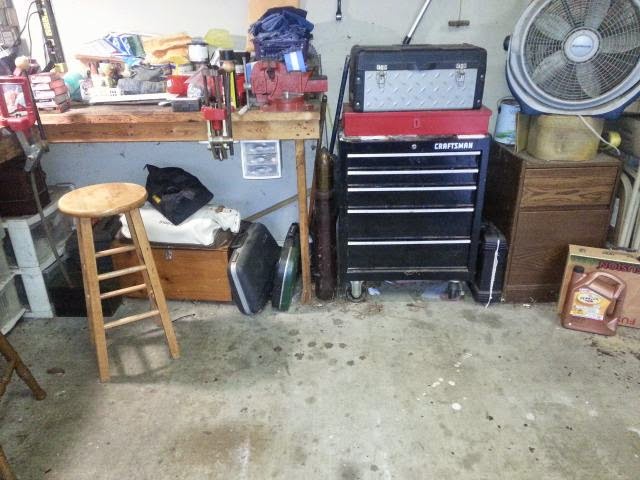 It sits beside my bench, near the tool box, and many visitors never see it there.  I found the projectile during exercises, then had to scrounge around for the cartridge case, hen re-assembled it.  I brought it to my Dad, who kept it near the kitchen table, next to the refrigerator.  At some point I took possession, and no it resides in my shop.    Here's a close-up.

That, gentle reader, is a 90 mm shot cartridge, from the M48 Patton Tank.  While that tank fired a number of explosive rounds, that particular reliv is a shot cartridge, used during training.  It's inert, or I wouldn't have it in my shop where grand kids play.  Yet, it amazed me how many visitors have never noticed it.
Posted by Pawpaw at 9:27 AM

Your loading bench does not look any better than mine. My dad and his friends used shell cases like that for ash trays at our hunting cabin north of Fort Leonard Wood. Escapees from the brig burned it down in the late 60's, it was my favorite place in the world when I was young.

It would have had a nice aerodynamic aluminum cone on it when they sat in my ready rack in Korea.

Hardened steel projectile was AP-T. Plain steel, painted blue, was TP-T, and the ranges at Knox had 'em laying all over the place. Every orderly room and motor shop door had one as a doorstop.