Winchester used to make shotguns, very fine shotguns, like this Model 21 on sale at Collector's Firearms.  Their "everyman's shotgun" was the Model 12, a pump action repeater that became the iconic pump shotgun of the early part of the 20th century.  My dad and grand-dad both had Model 12's and my younger son has my Dad's shotgun now.

In 1963, Winchester stopped production fo the Model 12, and in 1964 came out with the Model 1200, the successor.  That shotgun had an aluminum receiver and a rotating bolt that unlocked during recoil, making it very fast for follow-up shots.  It competed with the Remington Model 870, and many gunners liked the steel receiver of the Model 870, so the Model 1200 languished and was replaced by the Model 1300 in 1983 when US Repeating Arms Company took over manufacture of guns under the Winchester name.  The 1300 was produced until 2006, when USRAC went bankrupt.

In the late '70s my family began rabbit hunting with beagles and I wanted something that lighter to lug through the woods than my old duck gun.  A 20 gauge seemed particularly attractive, and one day I was in a box store and saw a familiar pump shotgun on the shelf.  The price was particularly nice and I dropped my money, as I recall, under $100.00 for a brand new 20 gauge shotgun.  It was a Winchester 120, a budget version of the 1200, with birch stocks and a plain corncob forearm.  It came with a brand-new accessory, the WinChoke, which was a screw-in shcoke that let you shoot one gun for every game.  Full choke for ducks or scratching a squirrel out of a tall pine.  Modified for general tasks, and Improved Cylinder for the dove fields.

Nowadaus, screw-in chokes are standard on nearly every shotgun, but back in those days, it was quite an innovation and I was the buzz of the camp when I showed up with a shotgun that had screw-in chokes.  It's not particularly light, at 7.5 pounds, and it's not short, at 49 inches, but it swings well, and more importantly, it fits me.  When I shoulder the gun, I'm looking right down the vent rib at the front bead.  I shoot it effortlessly. 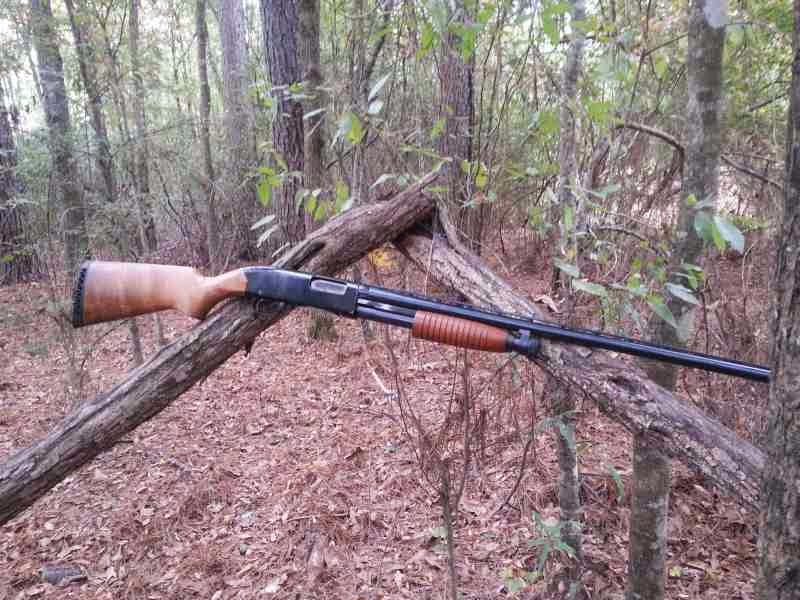 Since 1976, it's been my upland shotgun of choice.  It's accounted for bushels of squirrels, pickup loads of rabbits, the occasional wood duck and the odd woodcock that sprang up before me.  For a gun that's been used for almost 40 years, it seems to be holding up well, and if you ever see me in the upland game fields, the old Model 1200 is the shotgun I'll likely be carrying.
Posted by Pawpaw at 9:00 AM

Dad bought me an old Model 12 in 16 gauge as a high school graduation present.
It kept me from warming up to the
later Winchester pumps, or the 870 for
that matter.

Your 20 looks pretty good in that pic, however.