Global warming, or AGW as the believers refer to it, has taken on a life of its own, regardless of the science behind the movement.  Al Gore aside, his minion, John Kerry was in Indonesia last week, talking about the dangers of manmade global warming.  He referred to skeptics as "flat-earthers" denying science at their peril.


In a Feb. 16 speech in Indonesia, Secretary of State John Kerry assailed climate-change skeptics as members of the "Flat Earth Society" for doubting the reality of catastrophic climate change. He said, "We should not allow a tiny minority of shoddy scientists" and "extreme ideologues to compete with scientific facts."

The only problem with the AGW scenario is that  the measurements don't match the model.  Two very knowledgeable  scientists, Richard McNider and John Christy, take Kerry's arguments apart in the Wall Street Journal by explaining that the observations don't match the model.  They present this handy little graph which shows the difference between the predictions and what we're actually seeing. 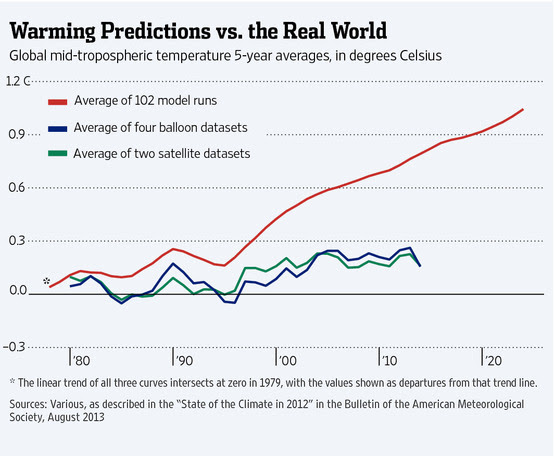 The red line is the prediction, the blue lines are the actual measurements.  The red line hasn't predicted the blue line in some... oh... thirty years.  In short, the current AGW model is poor at predicting actual temperatures.  We note, with some amusement, that Kerry burned over 12 tons of carbon fuel in the atmosphere while making his predictions about carbon-based warming.

If he's willing to burn 12 tons of carbon to make a speech about global warming, I have trouble believing that it's a problem.  Especially when the predictions don't come close to matching the observations.

When the Glowbullshit Wormerenistas act like there's a problem, I might begin to think there MAY possibly be a problem.

That's what I've said all along. When the people who tell me it's a crisis start acting like it's a crisis, I'll believe it's a crisis. Until then, they should STFU and stay away from me, 'cause last I heard, Alabama still considers the phrase "He needed killin'" to be a valid legal defense.