It's hard to find a more common .22 rifle than the Marlin Model 60.  In production since 1960, the things have been made for over 50 years and Marlin has made over 11 million of them in various guises.  They're all pretty much alike, but the one thing they all share is that they are simple, dependable, rugged, durable rifles that are found almost everywhere.

PawPaw has bought several over the years as training rifles, once the kids and grandkids got old enough and practiced enough to get away from the single-shot .22s.  The Model 60 is a good introductory rifle to the semi-auto realm and PawPaw is always on the scout for a good deal.

Today I stopped by my favorite pawn shop to look at guns, and sure enough, he had one Model 60 on the shelf.  It just came out of pawn, and this one is the Glenfield Model 60 that Marlin built for sale in hardware stores.  Same rifle, different roll marks.  They're simple to work on, easy to disassemble, and parts can be bought at lots of online places.  The fact that they're accurate little rifles doesn't hurt things a bit.

We haggled for a few minutes, and I asked for a 4473.  If it matters, I gave the guy $50.00 for the little rifle.  It's rough, but it's solid and with just a little work it'll be a nice rifle.  The stock is birch, and with pressed-in checkering.

I took the rifle apart and gave it a good cleaning.  I dount that it had been cleaned since it was first taken out of the box.  The insides were filthy, mainly with dust and old oil.  If you've never disassembled a Model 60, Junior has a good tutorial at Castbullet.com.  I've got a nice Nikon 4X rimfire scope set aside for this rifle, which will make it just peachy for the squirrel woods.  Over the next couple of weeks, I'll sand the stock and give it an oil finish.  I believe that the litle rifle will clean up quite nicely. 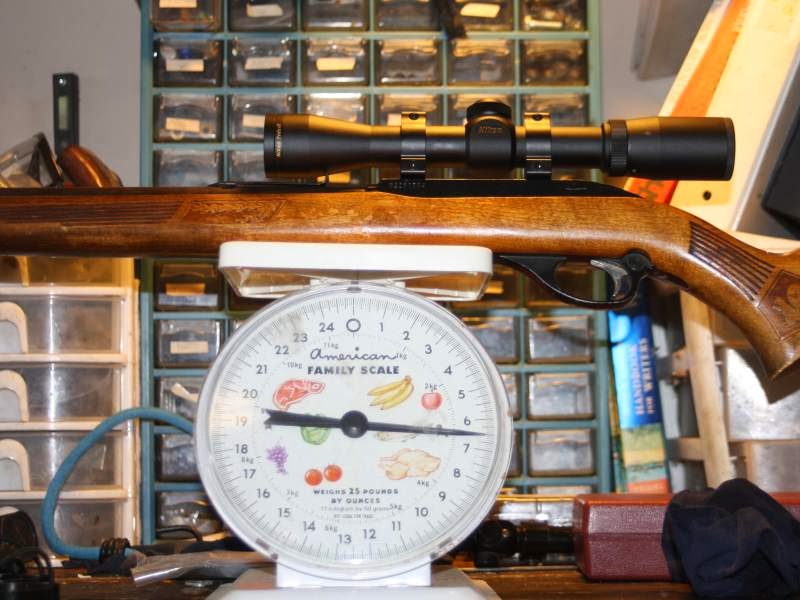 I didn't figure it would be that heavy, but there it is.  Still, it's awfully handy.
Posted by Pawpaw at 2:20 PM

Nothing wrong with birch and maple stocks. After all, real gentlemen prefer blondes.

A little weight is a good thing in a rifle. It makes it steadier to hold, an important feature. I wonder how many kids have been put off of shooting because they couldn't hit the target consistently with a 2 1/2 or 3 pound rifle? So 6 1/2 pounds is a good weight. Especially for a kid of 11 or 12 to a kid (like me) of 69.

I have one, but it has a problem: the last round in the tube doesn't like to elevate to the face of the bolt. This has resulted in embarassment when rangemasters order "clear all weapons". I have to hold the bolt open, invert the rifle and shake it hard.

Any reader have any ideas?