Over at Boned Jello, they're talking about breakfast, and they start with this wrongheaded idea of what liberals think conservatives eat for breakfast. 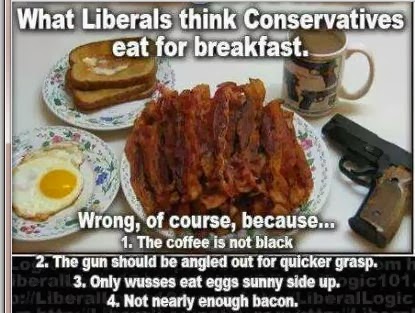 Well, some of that is true.  The gun is angled wrong for a fast grasp, and mine would probably be in a strongside holster, and the egg is sunny-side, which Milady likes, but I've always thought that one egg is simply silly, so they try again. 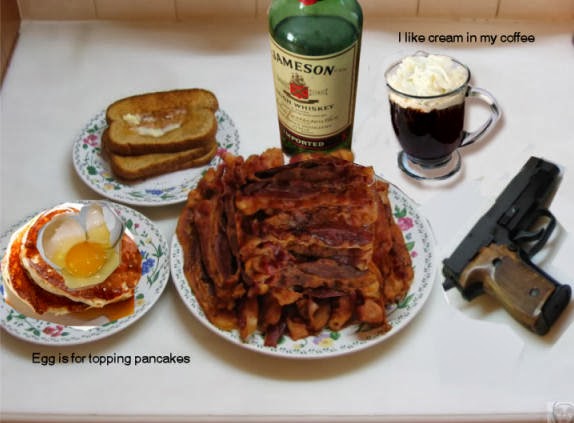 That's a little better, because we've got the pancakes and the bacon, but why is there cream in the coffee?  And what's up with the toast; are you making a sandwich to take with you?

No guys, first of all, it's gauche to have a gun on the table.  If you're expecting company, a short-barreled shotgun in your lap is so much more genteel.  And, no proper southern breakfast is complete without biscuits and gravy.  And, while we're critiquing, I don't see any hash-brown potatoes either.  I guess I could make do with the Jameson's but I'd rather have a shot of Jack in my morning coffee.

Email ThisBlogThis!Share to TwitterShare to FacebookShare to Pinterest
Labels: food

I don't see any pepper/hot sauce either.