A Tale of Two Bullets

I've been playing with a Ruger Model 77, an old tang-safety rifle, built in 1971.  The rifle is in .25-06 and I've been piddling with loads.  Several years ago I put together a load using Reloder 22 and the Sierra Gameking bullet.  I've shot it in my son's rifle and it shows good accuracy, under an inch, so I loaded some of those for my rifle and took it to the range. 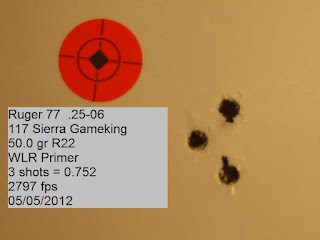 Sure enough, those went into 0.752.  Certainly capable for the deer woods  But, I wasn't getting quite the velocity I wanted, so I loaded it up one grain, to 51.0 grains of Reloder 22.  That opened the group up considerably. 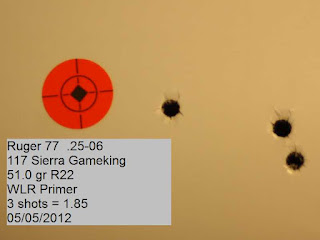 One extra grain of powder and the group opens up to almost two inches.  That ain't good, the extra speed isn't worth the loss of accuracy.  However, I've got some 117 grain Hornady SST's which are pretty good bullets in other calibers.  I had loaded some of those with the same powder charge, so I let the barrel cool, then settled down on the bench and let fly. 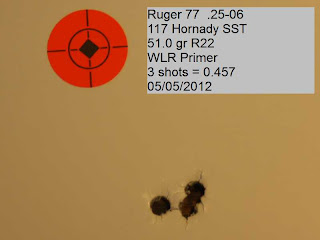 That's a pretty good 3-shot group, and my manuals tell me that it should be running just north of 2900 fps.  I also loaded each bullet with 52.0 grains of RL22, which my manuals tell me is a max load.  As I've found with max loads, the groups opened up to the point where I don't want to share them.  This does illustrate that when you change one component, you change everything.  In this case, one grain of powder and a change of bullets made a huge difference.

That Gameking load is a proven load in two rifles, it's always shot under an inch in either of the two.  However, that bug-hole group with the Hornady bullets has my eyes open.  It might be worth it to load another dozen or so and see if that group is an anomaly, or if it will continue to be a good load.
Posted by Pawpaw at 5:01 PM

Interesting how that works out, isn't it... Some rifles like a load, others don't...

I mostly hunt with a 257 Roberts with factory Federal ammunition. It by their charts runs about 50 ft slower with a 120 grain bullet then your accurate Gameking. No long shots but I have shot it 14 times at deer and killed 14. That load will hunt if you want to use it.

That group with the SSTs was amazing though.