I didn't want to set up my powder measure for such a small quantity of powder, so I decided to get out the dippers.  Lee's been selling dippers for as long as I've been reloading, and I've got a full set, so I got the chart out and got the scale out, and in just a few minutes I learned that the 2.2 cc dipper would throw 29.2 grains of my 3031.  Dipping powder is an easy way to measure it and with just a little practice it's easy to dip charges that are very consistent.  In just a few minutes I had dipped 20 charges and found that I was out of powder for that old can.  It's done and I have to buy some more 3031. 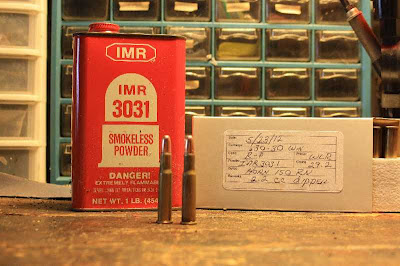 I don't remember when I bought that particular can, but I think that IMR quit putting powder in cans several years ago.  However, the Hodgdon still lists my load as acceptable in terms of their criteria.  We'll see how they fly, and I'll have to pick up another can of 3031.

Now, I need to find a dipper load for the .30-30 using IMR 4805 powder. I've got a good dipper load for cast bullets, but I've never tried that powder and jacketed bullets.  We'll see.
Posted by Pawpaw at 7:38 PM

Email ThisBlogThis!Share to TwitterShare to FacebookShare to Pinterest
Labels: reloading

Sounds like some range time is needed to test some loads! :-)