Gavin Newsome, you despicable troll.  Everything in the below tweet is demonstrably wrong.  Wrong on the facts, wrong on the message.  Let's look at it, shall we? 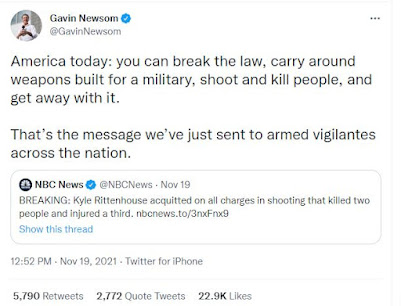 You can break the law: He didn't break the law.  A jury of his peers found him Not Guilty.  They found his self-defense claim both reasonable and justified.  No laws were broken

shoot and kill people:  He was forced to do that by the activities of those people he shot.  He did not choose to do that, Rosenbaum and Huber were volunteers and initiated the action.

So, Gavin, every single clause in your hypothesis is demonstrably wrong. Wrong in fact and wrong in law.  Perhaps you should sit down, shut up, and put your mask on.  Newsome is a barking moonbat who has destroyed California.

Now, we've heard from both California and New York, and they were both demonstrably wrong.

They don't care, they are pandering to their leftist base...

You just don't understand that no individual has the right of "self defense" against the "righteous" acts of the Democratic/Leftist/Progressive mob.