I spent part of yesterday trying to dissect the tsunami that hit the Democrats in Virginia.  And New Jersey, and a Texas House seat.  Virginia was he big news, but New Jersey was a very close race that should have been an easy win for Democrats, and Democrats lost a long time House seat in San Antonio.

This was not just about Virginia, although Virginia is hugely important.

If you look on the left side of the aisle, they are taking the wrong message from what happened to Tuesday.  According to the woke crew, it was all about white supremacy.  For example: 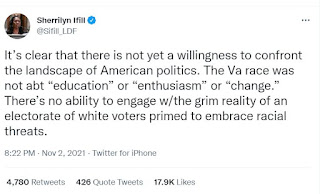 I'm over it, and have been since the early 70s.  It's true that I was born in deep-South Louisiana, but I've been over the racial divide since I became an adult. Since When I was a child, I did childish things, but when I became an adult, I served with magnificent black officers and NCOs  who I trusted with my life and who I counted as brothers. As a civilian police officer, I served with countless magnificent black officers who I trusted  with my life and counted as brothers. and sisters.  I've been over race for fifty years.

The Democrats in general, and the left in particular, needs to get over race, and catch up with a broad swath of the country who judge people by the content of their character.  We've been over race for years.

Maybe, just maybe, some of the ideas that the Democrats espouse don't fit the ideals of many Americans.

Perhaps, pushing transgender policies while covering up rape in a bathroom isn't a good idea.

Perhaps allowing huge populations of illegal migrants into the country is not a good idea.

Perhaps lockdowns, mandates, and vaccine passports are not a good idea.

Perhaps raising taxes is not a good idea.

I could go on for a while.  Call me a racist if you like, of a trans-phobe, or a sexist, or any other of your labels to divide us.  But don't expect me to vote for you.  I am over your labeling.

Exactly, they are the ones stuck in the past, the ones who keep making people one dimensional, who push a false diversity and who attempt to fight the real human diversity embodied in spirit, character, personality, and achievement.

Murphy was losing in NJ until the late night magic ballots appeared. Counties that were already at 100% reporting suddenly found 42,000 more ballots between 1:30am and 3am. It's rigged and you know it.

And for extra thrills, this unknown truck driver, Dunn, ousted the 7 term NJ Senate president Steve Sweeny. Dunn spent $153 on his campaign. MSM is refusing to acknowledge him the winner, although his lead is 3 times the sizes of all the remaining uncounted ballots in his district.

Communists (democrats) lie and project their own shortcomings onto their "enemies".

Its what they do.
Its in their instruction manual.

They are not gonna change.

They are evil. They kill to advance their agenda.
Cuomo and Wolf ordered contagious people into nursing homes and killed thousands.

Fauci sent money to a lab in china to make Covid MORE Dangerous so Pfizer J&J and Moderna could make billions.

CDC and the media lapdogs suppressed and derided the effectivity of Ivermectin causing the deaths of hundreds of thousands world-wide.

The only way they stop is when they are dead.

The MSM figures need to be confronted by the following statement: "The good citizens of the US are not going to allow the Left to turn the country into a communist shithole. Period. Race has absolutely nothing to do with it."