The shoot that we're calling the Triple Crown of Cowboy Fast Draw kicked off today, with registration and a Jackpot shoot.  Because of Covid-related problems, we are doing Texas State Championship, the Southern Territorial Championship, and the US National Championship in five days of shooting.  We are shooting at the Big Texan Steak House, in a building they have out back.

We were originally scheduled for another venue, but the Center for Disease Control tool it over and kicked us out.  The Big Texan was kind enough to offer the use of their space.  They must have thought it might be good for business to have us in the space.

The main matches start tomorrow, but with so many gunfighters in a building, we had to have a match.  I didn't feel like shooting, so I volunteered as a range officer.

When the shooting was over, and the trophies were awarded, grandson Zach was in 2nd place. 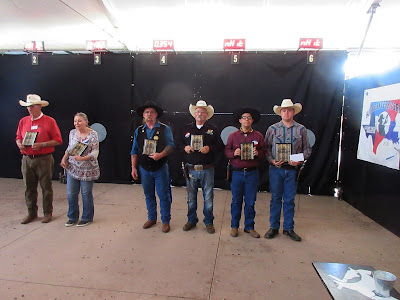 That's Zach, second from the right, with his trophy and an envelope with cash in it.

After the shoot broke up, we headed down the interstate to Olive Garden for a celebratory meal.  We're back in the hotel room, and Belle has declared Happy Hour.
Posted by Pawpaw at 5:43 PM