Jim Comey, ever the weasel, has beclowned himself on Twitter.  On the morning when President Trump is threatening to release some memo that all Democrats hate, Comey wades into karma and irony. 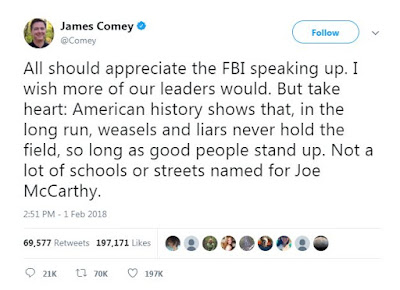 Hey, Jim, aren't you the weasel who declared that Hillary was not prosecutable, after laying out the elements of the crime, a crime that would get any service member prosecuted for mis-handling classified information?

Lots of people have been prosecuted for doing less than Hillary did, but it took a weasel like Jim Comey to try and clear her.  Karma's a bitch, ain't it Jim?

Yep, and after he laid out the items that should have been on an affidavit for an arrest warrant, he warned us that peasants better not do what she did, or they would be in real trouble.

The sad thing is this could be plausible, instead of satire.


WASHINGTON—Stressing that such an action would be highly reckless, FBI Director Christopher Wray warned Thursday that releasing the “Nunes Memo” could potentially undermine faith in the massive, unaccountable government secret agencies of the United States. “Making this memo public will almost certainly impede our ability to conduct clandestine activities operating outside any legal or judicial system on an international scale,” said Wray, noting that it was essential that mutual trust exist between the American people and the vast, mysterious cabal given free rein to use any tactics necessary to conduct surveillance on U.S. citizens or subvert religious and political groups.
link

Remember when everyone in fedgov, and the talking heads 'in the know', said Comey was a stand up guy? With every such utterance I was reminded of the painting contractor who had 'Quality' in their name; meaning there is no truth in the advertising.

And now you have even some of the supposed white hats decrying the release of the memo. Where there are secrets in government there is a loss of liberty.

Judging by the words of Wray, I reckon the legal and justice systems are nothing but charades. There was the 'Hillary defense' (I did not intend) but now the 'Wray defense' (for you to know undermines my credibility and ability).