It's the Monday of the Mardi Gras holiday.  The schools are closed today and tomorrow because Mardi Gras is a big deal in Louisiana.  The skies are overcast, the temps are chilly, and Belle and I are hanging around the house, piddling.

I've been out in the shop most of the morning, doing target maintenance, and taking inventory of what I have and what I need.  The Louisiana State competition is seven weeks away, and we'll be picking up speed until the first shot is fired that Friday morning.

I came in for lunch, and started digging in the 'fridge.  I decided to cook an old favorite, fried bologna  sandwiches.  I like my bread toasted, and we happened to have a stale loaf on the counter.  Stale bread makes great toast.  I had been to the store earlier, and had picked up some of those Mexican hot-house tomatoes.  They're not as good as vine-ripened, but it is February.  I'll make do with hot-house tomatoes until the local crop comes in. 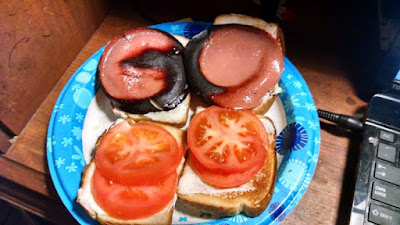 Belle and I will go to church later.  We're having a big eating meeting and we're going to bring a pan of Ouida potatoes.  Those are always a hit.
Posted by Pawpaw at 2:58 PM