In a great photo from World War II, a British Spitfire prepares to engage a German V1 flying bomb.  The Spitfire is trying to flip the wing of the V1 in odder to trip the gyroscope off balance, disrupting the flight path (trying to send it into a spin) 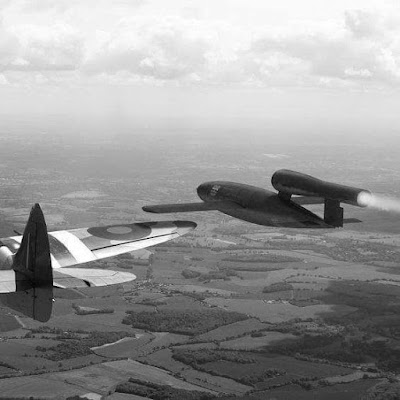 Great photo!  At least three aircraft were involved in this photograph (the photographer had to be sitting in something behind the Spitfire).  I do wonder why the Spit pilot didn't just shoot it down.  Several possibilities exist.  The Spit pilot may not have wanted to have the extra bullets from his machine guns falling on the English countryside (although he is about to drop several hundred pounds of high explosives on that same countryside).  Or, he may simply have been out of ammo.

Either way, its a very cool photograph.  I couldn't find attribution, but it probably comes from British military files.
Posted by Pawpaw at 8:13 AM

Email ThisBlogThis!Share to TwitterShare to FacebookShare to Pinterest
Labels: aviation

Yep, that was the 'preferred' method. Saved ammo, and only a slight scrape on the wing, if done right!

The problem with shooting them down was that they usually blew up - with often fatal consequences for the pilot who did the shooting since it had to be done at close range and an overtaking speed such that the plane flew into the explosion and it's shrapnel cloud almost immediately.

Nope, they were NOT worried about ammo usage at the time; there was more than enough to go around in England - they WERE worried about losing pilots and planes.

This image is likely computer generated (or photoshopped)...
While the MK XIV was one of the few aircraft able to catch and destroy the V1 flying bomb, this photo is far to clean and sharp what would've been carried by fighters (nothing else would be fast enough).
But, they really did "tip-up" the V1 wing, causing it to tumble out of control.
Real photos that do exist of the pilots doing this are taken from the ground, and usually very poor quality.
An example can be seen here:
https://euclidsbridge.wordpress.com/2011/08/08/wwii-pics-spitfire-uses-wingtip-to-topple-v-1-buzzbomb/