I likpe my whiskey from Kentucky, and like most of the folks I know, I normally buy one of several brands, depending on what I intend to do with it.  For mixing with cola, I generally pick Evan Williams, or Jim Beam, depending on which is the lesser cost at the grocers.  (Yeah, we can buy our hooch at the grocery store in Louisina.).  Recently, I've been mixing Benchmark whiskey with cola.  It comes at a " popular price point", which means it's the cheapest thing on the shelf that claims to be Kentucky bourbon.

A little research told me that Benchmark whiskey is made at  the Sazerac company's Buffalo Trace distillery in Frankfort Kentucky.  Evidently, Benchmark is their low priced offering, with other bourbons made for other palates.

On the advise of a friend, this weekend I picked up a bottle of their namesake brand, Buffalo Trace, to sample.  My son and I cracked the jug yesterday afternoon, and I m quite impressed.

I admit, I'm impressed.  Either neat, or with ice and a splash of water, it goes down smooth.  I'm not sure what flavors I was tasting, but it's a complex whiskey with a remarkably smooth finish.  It is easy on the tongue, and I can see that this stuff might "sneak up" on you.  It's smooth enough that you could drink three or four of these before you realized what you've done.

There is still a spot on my shelf for lesser whiskeys, but you can bet that Buffalo Trace has a spot there as well. 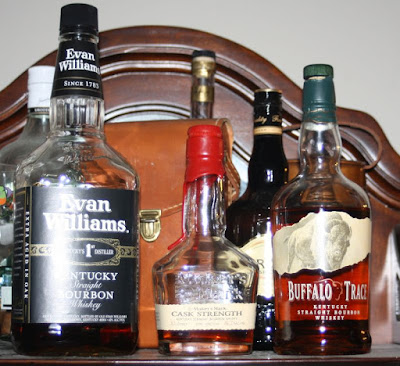 Gene Hill once said that: "No man is truly happily married if he has to drink lesser whiskey that when he was single."  If you have Buffalo Trace on your shelf, you have very good whiskey indeed.
Posted by Pawpaw at 5:41 PM

Email ThisBlogThis!Share to TwitterShare to FacebookShare to Pinterest
Labels: whiskey

Gonna have to give it a try.
EW and Maker's is on my shelf also.

I like Old Grandads; try it straight or with coke or water/soda.similar to Evan Williams price point but better for me. I also like Jesse Jemes, bout the same price as Jim Beam.
Ben

I bought a bottle of that EW black label and thought it was crapola. But I like my bourbon on the rocks.
EW WHITE label is rather good. If you can find it you really should try it.