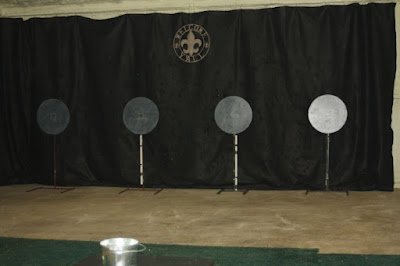 Using competitors bullets, they either shattered and left a mess of wax chips to clean up, or they were so hard they bounced back, completely to the scoring table, 35 feet away.  Belle doesn't mind score-keeping, but she doesn't lie dodging ricochets.  So, I was casting about for a bullet that would stay within the rang.e area.  Of course, everyone in the range wears eye protection.  That is an iron-clad rule in our range.

I sent Boab ad email on Sunday, and we agreed on the terms, and he shipped the bullets on Monday.  I found them on the front stoop on Thursday, after a long shift.  When I got home today, Belle and I walked out to the range, where I loaded a cylinder, and gave them a go.  They load easily into standard CFDA cases, pushed in with the thumb.  Belle worked the lights, and I stepped up to the line and ran then at the target.

We shoot from 21 feet, and none of the bullets made it back to the 15-foot line.They all fell on the concrete in front of the carpet.  They bounced, but they didn't ricochet, and they didn't shatter.  They simple fell on the ground about six feet from the target.

The bullets were easy to pick up, did not shatter and bounced only about six (6) feet.  Belle was impressed.  Belle was happy, and so am I.  They load easily, shoot fine, and don't ricochet all over the range.  We like these bullets and will recommend them to our club and our friends.

If you're a CFDA shooter and want to try the Royal Wax bullets, give Casey a call.  His contact information is under the link.
Posted by Pawpaw at 6:41 PM