As promised, some more shooting pics from yesterday's outing. 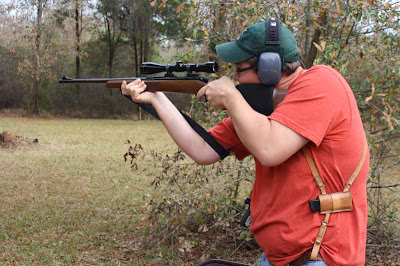 Snap shooting is an important part of practice here in our thickets.  Here, my youngest son is engaging a 100 yard target with a .308 bolt gun.  Yeah, he's a southpaw, and he has a left-handed rifle, but he wanted to try the Remington..  And, he hit the 100 yard gong, which is plenty good for whitetail deer or hogs.  All of my sons are very good shots. 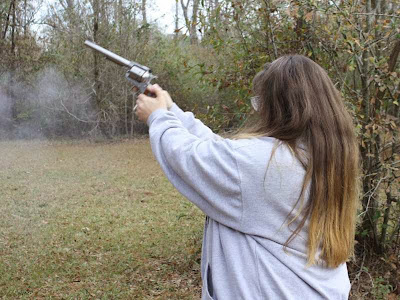 In this family, you can't be afraid of recoil.  Eldest son's wife with my 7.5 inch Super Blackhawk in full recoil.  She's not shooting magnums, but she does have a cylinder of Skeeter's Load, which is the load I most use in that gun.  A 240 grain bullet pushed to 1000 fps is plenty good medicine for most handgunning tasks. 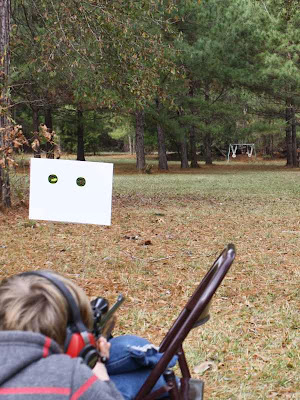 A view from the firing line, toward the target butts.  Behind those hangers is a berm made with blow-down trees, wood chips, dirt, anything  we can put on that berm.  It's a measured 100 yards from the chair to the swingers.
Posted by Pawpaw at 4:25 PM

And sure does resemble a fire trail too! :-)

I would give almost anything to have a aplace like that to shoot. You are one fortunate man, Paw Paw.

A wonderful family and a private shooting range. Woo! I hope you live to at least a hundred and enjoy every blessed minute of it.